Back in the saddle! with a bunch of cool stuff!

I'm back! had a nice relaxing vacation and know I'm onto more RPG stuff.  Below are a bunch of cool products that have come out in the last few weeks.  So of which you may know about some of which you may not.

I contributed to this awesome holmes inspired mag (added one cool table).  You can get it for FREE right here.

Dr. Holmes himself said the game was "fantastic, exciting, and imaginative." We all hearily agreed then, and we all heartily agree now. Still under the spell of that blue-covered book all these years later, we created a plethora of new elements to inject into games run with those rules (or honestly, any similarly straight-forward such rules).
Herein you will find well-over 50 new ideas for your game — all of it inspired by the art in the original book! New spells, new magic, new monsters and threats, new directions to explore, and plenty of twists on the classics.
Warm up your dice — Adventure is here!

The awesome +Andy Bartlett wrote a set of cool rules addons for Fighting Fantasy.  You can check out his post here:  http://drbargle.blogspot.ca/2017/03/viscera-v10.html
And download the rules here;  https://drive.google.com/file/d/0Bx10ahCQFRH2X1VkZU1NWHR0ZUk/view

Speaking of fighting fantasy, there is another cool set of rules that came out latetly called " Trokia!"  I had a chance to download the rules but haven't had a chance to read them other than a quick look over.

Troika! is a complete role playing game, giving you everything you need to create characters and lead them through the hump-backed sky towards adventure.
The game is a response to decrepit UK RPGs. A "retro" RPG rebuilt without sentimentality, corpses of darlings litter the streets.

There is also a free artless version here:

More than simply a fighter, the warrior class has access to talents drawn from a wide range of archetypes, all integrated into a single class. Berserkers & swashbucklers, thugs & knights, paladins & rangers, gladiators & skalds. No need for all of those specialised sub-classes any more!
Within these pages, you will discover:
Download it here: 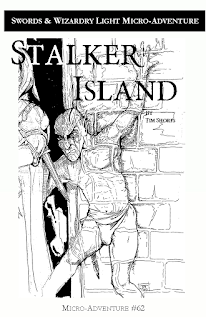 The infinitely productive +Tim Shorts just released a cool looking adventure for Swords & Wizardry light.  You can check it out on Tim's patron here.

Stalker Island was created for my sandbox using the Swords & Wizardry Light system. I'lll have more information about the sandbox soon.

If you have been living under a rock you might not be aware that +Zak Sabbath has a cool Patreon going for demon city.  He has posted a neat mechanic for task resolution here. 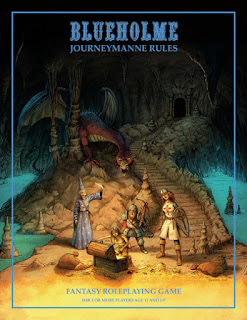 And finally Dreamscape Design has kicked off work on the Journeymanne rule set for Blueholme, which expands past 3rd level.  You can check it out here.

Journeymanne is simply a much-expanded version of the Prentice Rules. Character levels cover 1-20, so you don’t need the Prentice Rules to play. Characters can be of any species, referee permitting – we found medusae a bit tricky in play, but generally there are no technical problems in introducing any type of creature to the party. Character classes can be combined to create new classes like that old favourite, the fighting magic-user. There are also, of course, a lot more spells, a lot more creatures, and a lot more magic treasures. In addition, the rules have been expanded to cover high-level stuff like moving beyond the Underworld to adventuring in the Realm and in the Wilderness, and player characters establishing their own strongholds.

Posted by shanepatrickward at 7:40 AM