What am I working on?

Well what I'm currently trying to do is write one room a day for the adventure I started a few weeks ago.  So far I've not been doing too bad, and sticking with it! I've got two maps complete, one that is just penciled and one I need to draw. 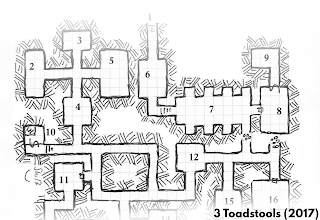 We had a bit of re-jiggering with our fifth edition group, so it sounds like we won't be finishing "strahd" right away, but possibly moving on to Tomb of Annihilation.  (i'd really really like to finish an adventure!)

Count of the adventures not finished:
*starter set
*out of the abyss
*curse of strahd.

Anyways I've been working on character ideas.  I took a look at the wotc site, and some of the pregens I don't mind, but there is a bit of tweaking I'd like to do.  So alas I am starting from scratch.  At this point I don't have any inkling as to what the other players like to play (other than one guy who likes being an MU).  I intend to create 4 classic characters. The human fighter, the elf wizard, the halfling thief and the dwarven cleric.

I have no idea what level we are starting at, and my knowledge of "chult" is limited to the forgotten realms wiki.  I'm partial to being the meat, swinging the biggest weapon i can find.  (my translucent d12 rolls high!).  I am considering buying some new dice for the campaign though.  Depending on if I get some time to hit the FLGS.

We are currently working on scheduling.
Posted by shanepatrickward at 10:24 AM