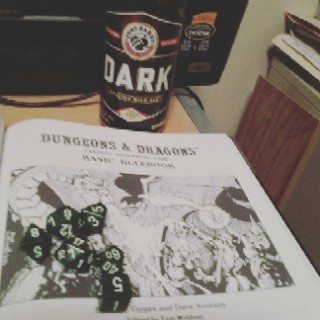 First time playing online last night, and it was a fucking blast!  +God Emperor Leto II messaged me about possibly running my new adventure "Dusty Door" and I honestly jumped at the chance to play! After we get thru this dungeon, I'm going to do a bit of tweaking to the final adventure adding in Jeff's two cents and hopefully getting all the stats for the other players (so I can add them as pre gens!).   Obviously of course I'll be adding the names of the other players to the adventure as playtesters.

Alright onto the evening.  First off not to toot Jeff's ego, but he's a fucking amazing DM.  He's very engaging as you can see.  I am unaware how much prep work he does, or if its off the cuff but that gnomish NPC was a fucking riot.

Mechanically Blueholme is a lot of fun to play online, and OSR games for that matter.  Less fumbling with modifiers, dice rolls etc.  Specifically I think DEX based initiative makes the game run so much more smoothly.  As a DM once you write down everyone's numbers (barring any changes from terrible potions), you only really have to worrry about the monsters DEX after that.  I'm putting that little note in my head for whenever I run a game online.

I gotta say playing with the other two guys was a lot of fun.  They really know their old school games. It makes it a lot easy to play a game.  We had a really good conversation about OSR games after we were done. For probably about an hour! haha.  I also found it interesting what their backgrounds were.  Some of the guys had played 2,3,4 editions.  One in particular found old school gaming thru lotfp which is awesome! Just made me realize how much I enjoy playing old school games.

What was very weird, was that my wife was watching the live feed on youtube downstairs while we were playing.  At one point we went out for a quick smoke and she was saying that I was being a bit of a "role play hog", ie talking too much.  I think I was honestly just excited, not because it was an adventure I wrote but because of just playing.  At some point I think she would like to jump in on a game.
I should also note that using the Journeymann rules one of the players ran a flesh golem! So cool.

I have now officially caught the bug to play online! I will have to do a few upgrades around my house to be successful at it.  First off no wifi, run a line.  Secondly I'll need to get a better headset.

Here's the video from last night!