It's your turn! - An Interview with Zak S.


1.  How did you get your start roleplaying? What system did you use?

I got the Red Box and a copy of the original Unearthed Arcana when I was like 10 or something but I think my first actual game was Teenage Mutant Ninja Turtles Road Hogs--you roll your character randomly so I was a prairie dog who was a "natural mechanical genius"--he could fix the van without even trying but if he was too far away from it, the whole thing would break down again.

Well I'd been reading Jeff's Gameblog, Grornardia and Monsters & Manuals for a while--I was interested in RPGs from an art/writing standpoint (Why were these things written for kids still in my head after all these years?) and then Satine Phoenix--we were friends, we met in a threeway with Sasha Grey--was like "hey I wanna play D&D" because she'd played as a teenager. Plus my gf was often too sick to go out so this was a good way to get friends to come to us--like a poker night. And then suddenly after a few weeks this was The Thing To Do and half our friends were playing. And all of them were porn people--except the stripper.


3.  Tell me about “Frostbitten and mutilated”.  What was the writing process like? 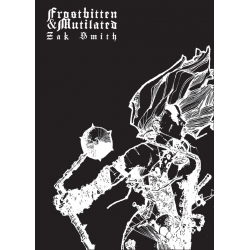 James typically comes to me with a Really Lotfp Idea (like Red & Pleasant Land was "I want a girl with her legs spread in striped stockings and it says 'Eat Me' on the cover") and then I make it respectable and pretentious and awardwinning.
So his idea was this Conan cover of Conan surrounded by zombies and he said "Like this but with women instead of zombies and we call it 'Amazons of the Metal North'. And I go "Well for a modest advance..."
Like most things I write, the book was largely just permission to type out things that were already in my campaign. From the beginning the country around Vornheim was frozen doomforest--so I just wrote that up then added in the Amazons, who were based on basically the elf barbarian Kimberly was playing plus a barbarian tribe generator I'd made years earlier, then subtracted out a lot of the fantastical D&Disms like elves and dwarves because LotFP is a lot more like "Normal 1600s, then horror" than my home game.
Also I thought about format: I want each new book to share a new way of making the book format work for a GM. So I thought up the thing where each area on the map contains the entire area description. That 2 page spread is the formal crux of it: if people start copying the "paragraph crawl" format then that book is doing its job. (Well even if its not, I used the book on sunday so its still doing its job).
The rest of the material was importing the Vornheim approach to cities to a wilderness crawl.
Artwise, I got the girls together, painted them like black metal warriors and they all posed and we took photos and I painted them--along with all the animals and monsters that kind of environment implies and we decided somewhere along the line that the aesthetic should be like a black metal album. So: we did that.
Also my mac crashed 10,000 words in and I had to rewrite all that. So that was part of the process too I guess.
Grab Frostbitten & Mutilated Here

4.  Other than elf games, what are your other favourite role playing games to play?

I really like horror and superheroes. Call of Cthulhu and a FASERIP hack I created. Oh and 40k.


5.  What was the first adventure you published?

Vornheim I guess. Unless "published" includes blog entries, in which case I think I entered a halloween adventure contest with a thing called Wolves In The Throne Room. 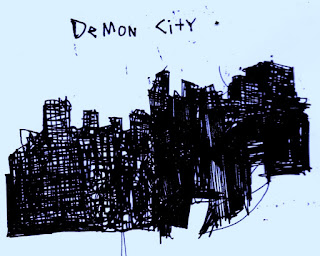 It's wonderful! People are so generous and into it. I just showed a ton of the Demon City art in my gallery in NYC and the show's selling really well. It's fun to do a game from the ground-up that's totally new but that uses an OSR sensibility. And playing at home is a blast.

There's the traditional indie game approach which is: solid simple rules plus a lot of advice on what to improvise. And there's the mainstream approach which is tons of rules threaded throughout the content. And then there's what I want to do: Solid simple rules plus a mountain of optional but gameable content to plug in. Why shouldn't a basic game include a Mad Libs First Adventure Kit instead of those shitty starter adventures they give you?

7.  What is your favourite OSR clone?

I think picking is stupid, honestly. As Jeff Rients' said, once you start doing that you are playing into the idea that these are different games and honestly: all these games are just variations on a pretty good game and they're all within a stone's throw of each other. I like the OSR-ified 5e hack I wrote on my blog bc it fits my current game group, but only the way you might like a shirt because it's in your size. There's no real hierarchy, I just happen to have players who like race and class separate and probably appreciate having their specific skills spelled out.


8.  What are you currently playing?

Oh jeez: I'm currently visiting NYC for the aforementioned art show so I'm playing Frostbitten here with my New York friends. They fought the Fibbing Troll. When I get back home we're playing D&D of course (right now we're doing a scenario which has Hot Springs Island as an island near Eliator from Maze of the Blue Medusa) and playtesting Demon City.
Online I'm playing a Dark Heresy game tuesdays, Warhammer Fantasy some thursdays, Matt Finch's Old School 5e on Mondays (its youtubed), Nightwick Abbey D&D with Evan Elkins once in a while and Jeff Rients' D&D game when I get the chance. Jesus, that's a lot now I look at it...but when you sit at a desk painting all day thats a lot of time to roll.


9.  What is a Call of Cthulhu scenario you like running?

I write my own. I have a Weimar-era one where there's an Idea That Will Destroy The World and it expresses itself in different ways: a virus, in dadaist poetry, in a painting. All my Cthulhu scenarios are tied to my Thomas Pynchony and art-history enthusiasms I guess.


10.  Who is an artist that we should be checking out, that we don’t know about?


11.  When you set out to create an art piece, do you have a RPG thing in mind? Or does it depend on the situation?

Usually I have an idea but the less of an idea I have the easier it is.


12. What is one of your favorite adventures other than something that you’ve released (or worked on)?

I really like the Secret Wars scenario for FASERIP they did: a big map, heroes plunked down in one part of it, a series of events that happen in order (if the heroes don't stop them) and a series of events that can happen randomly each day.
TSR was a mess, but a lot of their modules experimented with format in a way that display a lot more options than the Railroad vs Open Setting dichotomy people imagine. Frostbitten & Mutilated takes a little of this and expands on it.

13.  If you could campaign in any world which would it be?

Uh...the one I spent most of the decade writing books about and playing and doing blog entries about?


14.  When you get a chance to play a character, what type of PC's do you like to play?

I roll randomly. But all my guys are the same at the core: tactical and sneaky and they tell a lot of jokes. This can be a cleric a dwarf a paladin whatever. But I have more fun if I'm trying to Kobayashi Maru every situation.


15.  What is a seriously underrated monster?


16.  You play a lot of Marvel FASERIP, do your players tend to create simulacrums of the superheroes we all know and love, or do they create something new and fresh? Further, tell me about a typical superheroes game you run.

I tend to get like one high concept ("Assasinate the Evil Justice League!") and then run a session or 3. Characters in superheroes games are rough: SOOOOOO much of the appeal and expression of a superhero is how they look and most ppl can't draw. Often the default is to go "Ok, today we're the X Men, pick one". I did a Man InThe High Castle type one where people made their own heroes based on the high concept they were superhuman antifascists. We had an alien Ubermensch who escaped Nazi control, a mad scientist gone good, a Question-type mystery man, and the Shocker from Spiderman who becomes a resistance-hero car thief.
If I could solve the visualization problem for superhero RPGs in a commercial product that'd be pretty great. It might require computer support, like City of Heroes does.


17.  Do you have any current favourite RPG and fiction authors? (ie what are you reading).

Right now reading Borges poems. I usually don't read RPG stuff unless Im using it or someone pays me. Also halfway through Gormenghast. I haven't cracked the latest Pynchon--Bleeding Edge.


18. What are you most excited about in the DIY RPG scene currently?

I'm honestly just really happy it exists and is thriving and people are making stuff like crazy and doing patreons and kickstarters and just putting stuff out. Stuff I've never heard of and never will that's self-sustaining: awesome! The snarky Let's Sledgehammer Anyone Being Creative In a Way We Don't Like thing from the early 20teens seems to have finally fallen apart--all the people who used to do that have either put out their own stuff to zero applause and crawled back under their bridges or have self-destructed or fans have just learned "Oh, whatever people are most loudly complaining about it the good thing". It's wonderful. I think the next big leap will be when some other publishers start to consistently publish stuff that combines stylishness and experiment like LotfP does. Hydra Collective is getting there and Mike Evans' DIY RPG looks like it's leaning that way.
Like the new literature of the midcentury needed Barney Rosset at Grove Press but it also needed City Lights and New Directions. There needs to be a robust bank of people willing to experiment on a decent budget.

I'd rather have sex so whichever one gets to do that?

I never had Mountain Dew or if I did I can't remember what it tastes like and tea is so boring I always forget I'm drinking it so Scotch.

Finish the best horror RPG in history. Sew up the holes in my jeans.


22. Where can we find you on the web?
dndwithpornstars.blogspot
ihititwithmyaxe on twitter
Zak Sabbath on Google +
ZakSabbath on reddit /rpg

Thanks Zak! That was a lot of fun - Shane

Posted by shanepatrickward at 10:40 AM