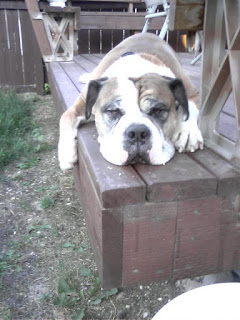 My cousin has this bulldog named Marty.  He's a sweetheart.  He is also sort of like a dwarf, very dangerous over short distances.  And he is an escape artist.

Sometimes he will let himself out of the backyard and go for a run.  The thing is he runs as fast as he can for as far as he can, and then they find him sunning himself somewhere on a boulevard in a 2 block radius from their house.

When it comes to writing I'm like Marty.  I have these spurts where I write like a maniac (or a bulldog on a run) and then I end up sunning myself on a boulevard.

And that's entirely fine.  It's no way to be competitive, but its fine.