The Master's Hoard - A Review 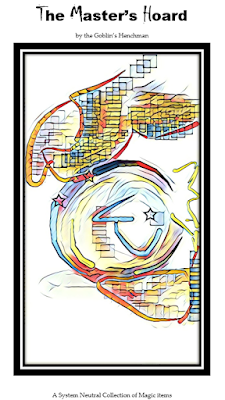 Publisher Blurb:
A System Neutral Collection of 22 Magic items
Hopefully most of the items are fairly original and are often accompanied by a quirk or two!

A grabbed a copy of "The Master's Hoard" a little while ago, but hadn't had a chance to read it until now.  The author Goblin's Henchmen I've done a lot of work with over the last few years, he's contributed rooms to the blue baron series, and he made a very cool version of "Dusty Door" using an excel spreadsheet.  (see video and channel here).  While you are at it watch a bunch more of the modules he's been working on! Super handy stuff.  The book is 26 pages including the OGL.  It is however a slightly weird size 8.27 x 11.69 (I chalk this up to Mac software, it seems to do weird shit like this, and sometimes I have trouble printing it)

Alright, onto the review.  First things first, I gotta write up a better blurb for him.  The pdf contains 22 system neutral magic items (although I would refer to them as artifacts I think, because they seem to me more of a one of a kind type of thing).  The premise of the book is that the author has been given each one of these items to detail for his master, thru working with the items he/she has discovered the powers that they can wield.  I should note that while this is system neutral it is decidedly OSR D&D feel to some of the mechanics.  That being said some simple conversions to other systems would be fairly straight forward (mentions of dice mechanics & damage as an example). example the "troll jawbone axe" does d8+4 damage, however if you were running say Advanced Fighting Fantasy you could treat it as a large weapon/monster damage.  Alternatively if playing Holmes or S&W you could just rule it as 2d6 damage.  Once again, not that big of a deal.

One of the super cool things about this supplement is that its setup up so that each magic item is on an individual page, which allows a GM to make hand outs for players.  Provided you play a game that the PCs are allowed to know what a magic items does (in some cases GMs like to not let people know outright what a magical item does, but only thru trial and error find out).

Further I really enjoy a lot of the names of these items "hosiery of ten steps", "Globe of Futures Forestalled", "bottle of misadventure".  Good stuff, beats the crap out of "+2 magical potion of giant strength" doesn't it!

I would be very curious to see exactly where this Master's hideout is, and besides these wonderful magical items, what exactly would be in store for the PCs if they dared to enter it!

I really dig a lot of these items, and would probably use more than a few of them in a campaign.  A lot of the items have interesting mechanical things associated with them.  example "Blade of blinking" allows a user to blink (teleport) when an adversary is hit.  Mechanic:  The 'blink location' is indexed to the weapon damage roll (see below). Where multiple dice are used for weapon damage (e.g. 3D6), then only the lowest die roll of the set is used to determine the 'blink location':
• 1 Rolled - user blinks, but ends up front and center of the target (no advantage gained by the user or target);
• 2 or 3 Rolled - user blinks to the side/flank of the target (next attack is: +1 to hit target; and -1 for the target to hit user);

Note: I purposely left out +4 so you have to go and read the rest of the cool magic items.

The Master's Hoard is FREE.  Get it here.

Posted by shanepatrickward at 3:15 PM