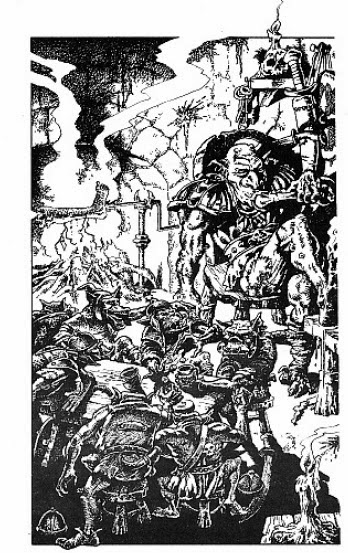 A few quick little updates for Monday.  I'm still working on my Greek themed adventure module, I'm hoping to get that done by December.  I'll keep you posted on it.  I'm trying to get as many historically accurate references into it, which is taking a bit of time as far as research goes.

After having a discussion with my players, we are going to take a break from playing some Old School D&D type games, and move to a campaign using Advanced fighting fantasy, (you can grab a starter copy on drivethrurpg)

I've briefly discussed this idea before, the premise is going to be based on Terry Brooks books about the magical world of Landover.  I'll be posting a bit about the campaign as time goes on.  However it is a copyrighted work, so probaly not a ton of information.  The big reason for this is that my players want to "grow with experience" and the way AFF deals with experience this will allow them to have PC's for a bit longer than one adventure.  To a degree it will be slightly railroaded, however I'm planning on setting up 3 or more options for adventures at the start that will all eventually coincide together.  Because the players start out a bit tougher I can throw a few tougher things at them.  This is what I have so far (planned ideas).

A "plane of hell" type dungeon crawl, where they have to fight demons
A actual full scale battle
A trip into a fairies realm, sort of a very misty forest where the border's end in mist.
A meeting with an old Dragon, (either to fight or to negotiate with).
A sandbox map that is bordered on all sides by the faire mists

Should be interesting.  The other thing I'm doing is writing this old school, pencil & paper, no computers, just a notebook.

Posted by shanepatrickward at 6:37 AM