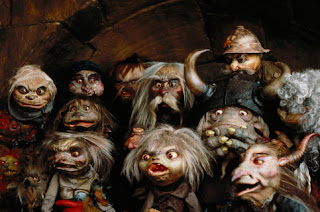 So last night, I was thinking about the movie Labyrinth, and specifically a old book that my Mom had purchased after the movie had came out.  "The Goblins Of Labyrinth"

The Goblins of Labyrinth is a tie-in book to the film Labyrinth, and features sketches by Brian Froud and captions by Terry Jones. The book does not directly refer to the plot of the film, and is primarily composed of sketches of goblins Froud produced as inspiration to the film-makers which are accompanied by comments on each character written by Jones. - source
I absolutely love this introduction.

The goblins are a remarkably diverse race, ranging from only a few inches to several feet in height. They also have drastically different physical features, displaying a diverse range of physical characteristics. Some goblins have small eyes while others have huge, protruding ones, some have horns and wild, unkempt hair while others are completely bald.


Which got me to thinking the following:
1.  It seems that every "monster manual" that get's released the books are filled with vile, evil, high hit point demon type scary things.  Which is all well and good, however...

3.  There's honestly not enough goblins in the world.

So without further ado, here's the first one.

Akamit goblins for the most part are burrowers, they make their homes below ground, much like squirrels.  A typical Akamit lair is an interconnected series of tunnels, leading to the surface, and further down into the depths.  Akamit's are much like magpies in a way, anything shiny that they find they grab quickly and haul back to their lair.  Wether these shiny objects are worth something to an adventurer who knows really? In some cases adventurer's have found actual magical items along with detritus and extremely shiny pieces of metal that have no actual value.

The Akamit goblins are quite a bit shorter than regular goblins (in some cases only being about 2 feet off the ground!).  They are quite disheveled in appearance, and have long front and back claws that they use for burrowing.  While not the most intelligent of the goblin offshoot races, they do have a sense of community.   Their main purpose in life is to breed, live, burrow and collect random bits of junk for their lairs.  Some circles of sages believe that they ingrained reason for the collection of bits of junk relates to their need to appease a long forgotten god.  Other's argue that their limited eye sight is to blame, when something shiny appears they just need to grab it and look upon it.  Whatever the case, normally there are piles of junk around.

While not extremely vicious, the Akamit goblins will defend their territory with traps, violence and usually "wild goose chases".  When a group of Akamit's are encountered, they will all run off into random tunnels, in the hopes that any would be intruders will follow them.  These tunnels that they run down are trapped, and none of the Akamits will go back to their actual lair.  When playing a Akamit goblin, they have no special stats per se, other than having fairly deadly claws (d6 damage).


Posted by shanepatrickward at 7:29 AM