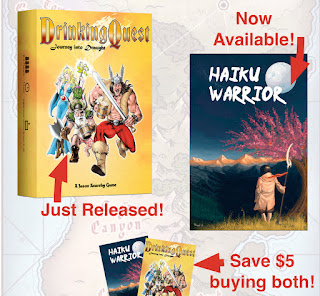 So after our 5e D&D session, my friend Adam (Nim the Gnome Illusionist) pulled out his recently acquired purchase of "Drinking Quest!"

Since we had already imbibed a bit, this was a great plan!

I was the DD on Saturday however, so we played the following rule for me, "Basically I'm not allowed to pee, if I do I loose 5 GPs". For everyone else they have to of course pound their drink.

Mechanically the game is interesting, because the skill checks use a combination of a d4, a d8 and a d6.  And its a bit old school in that your rolling under your skills.  The skills by the way are hilarious, including Sexual Prowess, Tolerance,etc.  That starts you off giggling right away!  So everyone gets a player card, I was some ancient magic user lady.  Basically (somewhat similar to munchkin) you draw cards on your quest.  You either have to fight a monster or have to do a skill check.  The person to your right plays the monsters for your round, and so on.  Once we get thru the first deck (there were 4) we had completed the first of the four quests.  There's this cute little map showing you were you are in the grand scheme of things.  The map is laminated and made out of something similar to leather.  Which is handy with people drinking around it.  I would almost go and laminate all the cards for the same reason.  The game comes up with coasters as well, of your player.

The game is for four players, but I could easily see 8 players taking turns no problem.  You would also get a little less inebriated.

I've never really been a fan of drinking games, because I tend to just drink at my normal pace while playing a game, so when i have to "chug", I'm a little really?  I've been drinking this the whole time.  Since none of us really need to get drunk, we were basically have sips, rather than chugging beers (when you loose a skill check or get defeated by a monster).

There is also a store, where you can buy extra armour and weapons, including beer keg armour.  One thing of note, if you play this game, buy stuff early! The monsters get difficult as you continue questing.

We played for about an hour and a half giver take.  The consensus after the game was that we would totally play again, and one of the players is considering buying it as well.  It's a nice brain break after a session of regular role playing.  Or as a beer and pretzels one off when your waiting for players to show up.

Quite funny, and worth it in my opinion.

It appears you can buy the game on android for $2.49

I am in no way affiliated with Drinking Quest.

Posted by shanepatrickward at 6:01 AM