Wait it's September? Ah crap I was supposed to do this! #rpgaday2016

30.  Describe the ideal game room, if the budge were unlimited.
A friend of mine sent me some super cool hand made wood tables for gaming, and I was over the moon thinking, "K WOW! This would be crazy awesome".

Honestly though, my Wife and I have been talking about fixing up the basement for gaming.  The plan is the following... (and this isn't based on the question really, but what we are going to do). 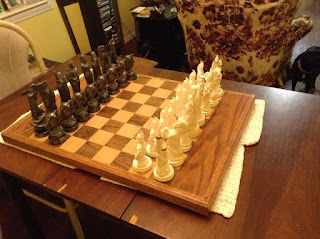 In the basement we plan to bring all the books and our big table downstairs, as well as a few other gaming tables, including our home made chess set that was built by my wife and her father.  Eventually grab some extra chairs for cheap/free.  Then hang some maps (Forgotten Realms, Menzoberranzan).  Also the giant posters of dragons that I have hanging down there already.

I'd love to get a suit of Armour as well, but that's not in the cards.  Maybe one day.  In the mean time I'll set up a home made beer keg, and have the wine rack ready to go :p

A nice comfy place to game, with a spot for the dog would be great.  Of course it would be nice to just leave the books downstairs on the table.  I tend to bring my books down from my office and then they sit on the dining room table until the next game session, which is rather a pain. 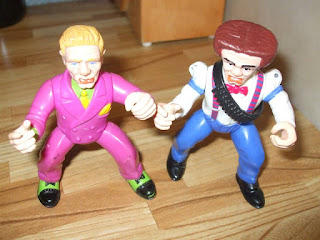 Oh and eventually when I get some crazy nerd collection (possibly Dick tracy figurines), there will be a place for them as well.  Grand scheme of things, it's going to be Nerdvana with a Nirvana soundtrack.


31. Best advice you were ever given for your game of choice.

Well this is super easy!  "rulings not rules".  Honestly the best advice, and if you run games this way the players look at you and go "yah I would have made the same call", instead of rules lawyering you.  And I would be amiss if I didn't mention the Old School Primer..

A little Nerdvana for you.