A touch of class and other things 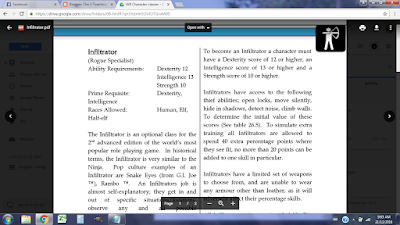 Another week and another OSR class, this time +Ivan Sorensen suggested a "infiltrator" class.  Since I grew up with the 2nd edition of the world's most popular role playing game I decided to try my hand at making a class specifically for that.  I even went so far as to attempt to hock the layout of the PHB as best I could.

Last week I created the "Initiate of the silver hand" class for S&W, with a little help from +James Spahn https://drive.google.com/open?id=0B-hlnlR7qn5XVVNhaDlpWHRmSms

I am also working on a Battle mage class, that is slwoly coming together, it is not done yet, but here's the link. https://drive.google.com/open?id=0B-hlnlR7qn5XdVpmZjV3MzI3Z0U

If you are interested in the cool classes that have been created so far, there is a hash tag #osrtouchofclass

As well you can go over to the OSR community on Google Plus.

Yesterday I spent a bit of time working on a "Mutant Manitoba Map", I printed off a hex graph paper from printfreegraphpaper.com the only issue is that When I went to start doing some editing in gimp my scanner for whatever reason didn't scan correctly and I could not for the life of me line up a pdf layer of the hex map and the scan.  So today I'm going to just re draw the darn thing. 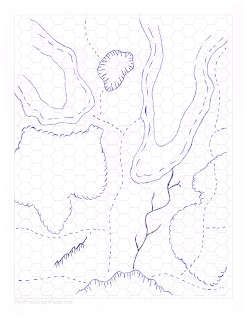 As you can see it doesn't quite line up.  I think what I'm going to do is trace it with a regular piece of paper and then re scan and toss the hex in the back ground.  I've had this same problem with regular square graph paper.

Interesting note, when I use my work scanner it seems to be a bit better, my home one also adds some odd purple colour to it.

I am hoping this post isn't too disjointed, I'm currently watching "Conspiracies" a British TV show about well just that.

I also have all my wrapping done, basically ready for Christmas.  And still have a pile of day's off, so I'll keep working on the map and maybe do something else fun!  I haven't written an adventure in a while and I'm curious about writing for Swords & Wizardry Light.
Posted by shanepatrickward at 7:21 AM