Alright so I posted about this earlier.  The following ins a dungeon crawl for Swords & Wizardry Light, using one of my maps, and +Steve C "Random Dungeon stuff generator"

I'm also going to use this awesome generator for the back story.

Plague of sorrow (is the name I came up with).

The PCs are met by a large comely woman in a tavern.  She tells them that if they can safely get a magical ring to her employer deep in the sewers they will be rewarded with precious gems.  The sewers beneath the city are a very dangerous place.  Her employer is a sage who lives underground and does strange experiments far from prying eyes.

Unbeknown to the players there is a gang of thieves hot on the trail of the players.  Turns out the ring was stolen from the gang, who had previously stolen it from some one else.

During the conversation in the tavern, a local soldier overhears everything and quickly sends word to his superior that the players have a powerful ring that may have once belonged to a king, but hasn't been seen in years. 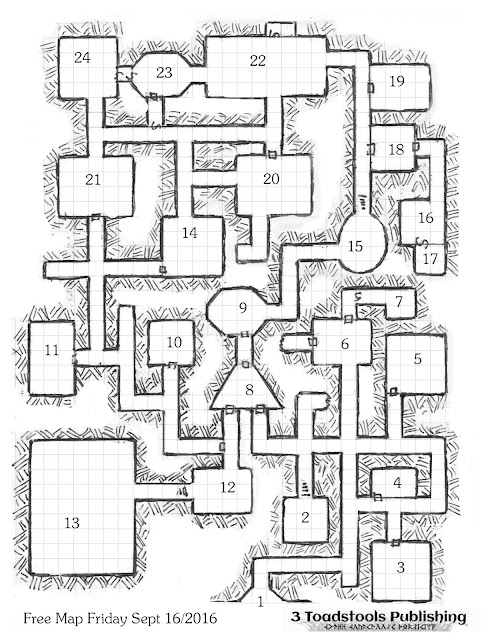 3.  As soon as the PCs enter this room it fills with thick black smoke.

6.  This room has 6 adventures carved out of stone in action poses.

7.  There is a acoltye in this room studying by candle light.  A treasure chest contains 100 GPs, a ring of weakness, and 1 magic missile scroll.   AC 2 HD1 dmg mace 1d6

9.  This room is empty, except a rather strange looking rubber chicken that seems quite out of place in a fantasy world.

10.  there is a pile of rubble 20 feet deep leading up to the room, one of the walls must have collapsed over the years. (the room is empty).

11.  The door to this room is ajar.  The room is filled with cobwebs.  If a search is made a Brass orcus head belt buckle (worth 25 GP) will be found amongst the rubble.

12.  There is a 10 foot tall pole in the the centre of this room, it looks to be made out of marble, and is multi coloured.  (if anyone touches the pole, any of the coins they are carrying will turn into glass marbles for 24 hours).

13.  (sages room)  This room is filled with large bookcases, tables filled with weird bubbling apparatus, skulls in jars.  A few scrubby looking children tend to very large plants, one of them is in the corner roasting something over a fire pit.

The sage has brought the hero's here as part of a sinister test.  He had heard of there previous adventures, and wanted to test their metal in his sewers filled with traps.  He is a very evil man, and he treats his slaves terribly.  The sage will tell the players that if they want the jewels they will have to complete another much more terrible quest for him, he will however double what they were originally supposed to receive.  The ring they were sent to bring him is entirely worthless and non magical.

14.  Upon entering this room one of the players will hear another player whispering insulting things about them to another player.  This will randomly continue with different players hearing things as long as they stay in the room.

15.  When the players enter this room they will hear the chattering squeaks of a swarm of rats behind them.  (However it's entirely up to you if they just hear it or there are actual rats!).  There are 4 Cobra snakes in this room.  AC 7 HD 2 Dmg 1-3 plus poison.  (save vs poison or be blinded)

16.  This room looks like it recently had a huge fire, there is rubble lying around every where, half burnt books, an old chest (locked, contains 50 SPs).  Amongst the rubble is a what appears to be a spell book, the cover of which has an outline of a skeleton in gold.  Written upon it is the name of a long dead demi god.  (it contains 3 - 1st level spells).

17.  There are 1d6 Gnomes in this room, they appear to be under a hallucinatory spell.  (Dispel magic should cure atleast one of them).  AC 5 HD 1dmg 1d4 dagger

18.  There is a warrior named "Arah-kyl" who has made camp in this room.  He is extremely naive and believes that he is one of the best fighters in the world.  He is actually just extremely lost.  While speaking with Arah-kyl the PC's will here a Horn blast echoes off in the distance

20.  Weird glowing spheres rotate and float randomly around the room.

21.  burnt torch and the body of a young child clothed in rags.

22.  This room is covered in spider webs, something shiney glints off the torch light.

23.  Both doors to this room are locked.

24.  When the PCs enter this room they will hear a young girl screaming behind them.  She is running down the hallway the PCs just came from.  She is an escaped slave, dressed in rags.  She needs the players help to get out of the dungeon!

I will put up a better stated out version of this as a pdf download via google drive later tonight. or tomorrow sometime.

BTW the map is licensed under CC.
Posted by shanepatrickward at 7:02 PM