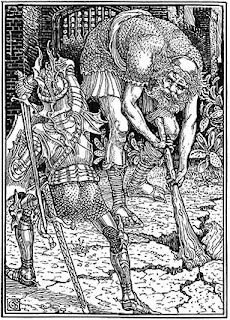 The Ghostly warrior will sometimes appear in the dank places underground.  He/She was a veteran of many wars and armies.  Every round in combat, the warrior's visage will change.  From a young soldier to an old grizzled man.  As the rounds change, so will his/her armour.  Roll on the following table every round.  The ghost fades in and out from ethereal to almost real as the combat rounds move forward.  Trapped between semi life & death.