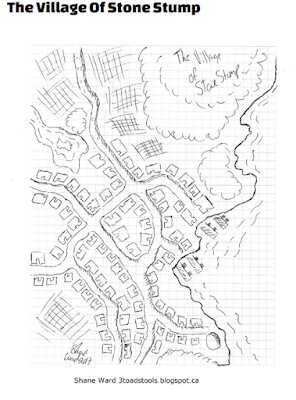 Just working on a list of rumours from the small town of Stone Stump.

1.  During a pilgrimage a local cleric contracted lycanthropy.  She was unable to be cured by priests.

2.  A group of goblins have been charging a toll to get thru the local woods.

3.  A merchant boat was sunk off the coast, under suspicious circumstances.

4.  The latest crop of wheat has soured, locals believe it is the work of the gods.

5.  Strange sounds are coming from the basement of the local tavern.

6.  Four babies were stolen in the middle of the night.  There are no clues as to their disappearance.

7.  A small crew of loggers have come back to town frightened by low rumbling sounds in the forest.

8.  The mayor of the town wishes to court a local elven maiden, he wants a rose delivered to her.

9.  An outright brawl occurred on the docks over "fake gold".

10.  The local taxman was found murdered in his home.


Posted by shanepatrickward at 9:22 AM