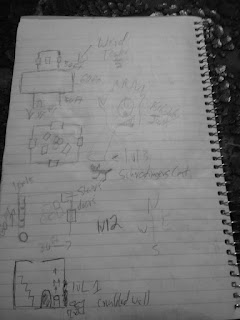 So we finished up the black hack adventure that Matt was running last night.  It was filled with epic silliness.  We were originally supposed to go to this bubbling tower in search of a magical creature.  We did find one, a unicorn, however we kept looking (cuz you know your in a tower so you want to check the whole thing out).

After finishing up looking around the 2nd level of the tower (which was made by some wack a doodle architect!*) we decided to go and check upstairs.  Being a typical murderhobo thief I went first with my bow ready to shoot anything that moved.

I get to the landing of the next level, and there's a black cat and a Oculus!** Apparently he was trying to make friends with the cat.  Anyways, shoot at things that move.  I fire an arrow at him, after he shot a beam of light from his eyeball at the cat.  (You can't blame me, I thought he was going to kill the cat.  I maybe chaotic, but I have a heart).

Tim Shorts character came up the stairs and lobbed a thermo nuclear detonator (yup we are in a fantasy setting).   I was still upstairs when it blew.  Blasting apart this crazy magical lab.

I managed to grow a new arm, and when the contents of the lab blew up all these magical potions got destroyed causing effects to all of us.  Tim's character, ever 22 minutes he splits into 2, and he has to suffer thru regrowing a tooth everyday just to have them fall out at the end of the month! 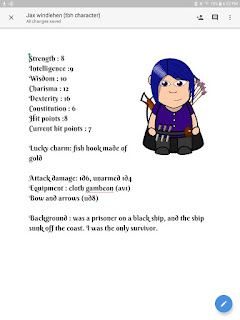 Somehow the cleric saved my ass, and while I was lying there bleeding to death I saw the black cat jump out the window.  The thing that amazed me though, was that it turned into a griffon and flew away! (schrodinger's cat?)

I guess that was the magical creature that we were supposed to find.

We left off trying to decide what to do with this awesome tower, and the unicorn who poops magic gems!  Strongly considering getting a wagon and bringing all that back to town like crazy heroes!

The session was a blast, and I'm really digging black hack.  Matt was talking about trying to do a sci fi type game with it.  Although not using any of the hacks of the hack, just the straight up black hack and re name character classes.  As I was suggesting a thief could easily be a computer hacker/space pirate (han solo type), warriors could be a chewy kinda creature etc.  It's a great system, one that I intend to play in the future.

**Turns out this oculus was young, and didn't grow up with other's around.  He was trying to find a mate and he figured the best way to do that was to get some moolah.  So he created a magical lab in order to make some cash, and then in turn find a mate that would be willing to hang with him.  The cat was his friend.  Unfortunately we almost killed him, so I hazard to guess he's coming back for us at some point.

Posted by shanepatrickward at 8:44 AM