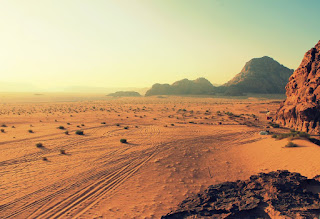 The hero's have worked their way thru the megadungeon, in search of treasure and the evil mage who rules the surrounding lands with an iron fist.  The campaign has stretched on for a few months.  Everyone is tired of fantasy, orcs and goblins.  Deep within the dungeon they start to feel an emanating presence, almost a low ring as if to pieces of metal were stuck together.  This ring gets louder in their ears as they get closer to a large metal door.  Odd? All of the doors in the dungeon have been made of wood, and most have been in terrible shape.  This door stands out, because its a door unlike anything that has been seen before.

The thief grabs the handle and tests it.  Everything seems to be okay, no traps, and it's unlocked......

The hero's slowly enter the room and find a very strange sight indeed.  The torch light casts shadows over a ring of metallic chairs in a circle.  A large computer screen shows an above shot of what the PCs are doing.  The dwarf scratches an itch on his left arm, and to his surprise the monitor shows that.

What is this weirdness, is it some trick by the evil mage?

The wizard pulls a feather and a string from his sleeves, and casts a spell.

"There is no magic in this room, but I fear for what it really is.  Truth is stranger than fiction" comments the wise sage.

Peering closer to the figures in the chair the dwarf realizes with utter horror that it is in fact the heros!

They are hooked up to a large machine in the floor, cables run the length of the room.

The mighty warrior whose arms are bigger than his brain, immediately walks up to his doppelganger and pulls the plug.

He opens his eyes, and breaths.  He is in a large metallic room, surrounded by machines.  The rest of his compatriots are nearby in the same circle of chairs.  Thru a plate glass window he spies a tall greenish skinned double headed woman wearing a lab coat.

The PCs are now in a bunker, the fantasy world was a dream.  They wake up to the harsh reality that they live in the wasteland.

Posted by shanepatrickward at 7:47 AM