My heart is happy

I have fond memories of those old green spine books from the magical island across the sea from me.

(this post was started awhile ago, and I'm finally getting back to it).

These books were my first introduction into this role playing world.  I remember having a shelf full of them when I was a kid.  Listening to Nirvana Nevermind on a cassette and rolling dice on my lap, instead of doing homework.

When I first jumped onto google plus, I think my first search term was Fighting Fantasy.  Shortly after I found the OSR.   Shortly after that I created a community for Advanced Fighting Fantasy.  I then grabbed the NEW version of AFF by +Graham Bottley .  I dubbed it AFF 2.0, I think it stuck.  I love that there was a vibrant community around all things fighting fantasy.  All this is possible because of the internet.  I remember being a nerdy kid thinking "I wonder if other people know how cool this is?".   I didn't know that it was HUGE in the UK (yonder magical island across the sea from me, where there are pubs on every corner, note I must go there).

My interest in AFF & FF has been reignited latetly, as I've been reading a few of the solo books in my spare time.  Crown of kings & armies of death.  Which has got me thinking about either writing my own rules hack, re-buying the original dungeoneer or just running AFF 2.0.  The other night I found a PILE of resources out there for AFF.

The original advanced rules were broken, there was a lot of things like leveling up that just made heroes gods eventually.  That being said, the simplicity of the system is JUST AWESOME.  And honestly I think it would be perfect for 1 shots or even a 3-4 session type game.  Part of the reason I don't know if I would run Aff2.0 as a one shot is that not everybody has the rules handy.  (especially if playing online).  So what I might do, is just go ahead and create a house rules document with the basics.  Possibly use a few tweaks from Troika, AFF 2.0 etc.  Basically something that allows a quick start type of game.  (speaking of quickstarts there's one for aff 2.0).

If you haven't heard about TROIKA! you should go and check it out.  It's a throwback to the original set of advanced rules, however there's lots of fun little tweaks.  From a brief little read, there is a world behind the rules, classes, backgrounds that all tie in.  (A full review is upcoming).  Here's the blurb. 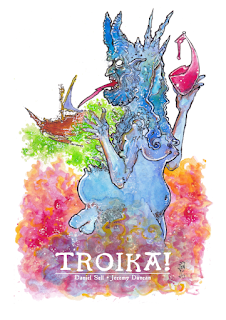 Troika! is a complete role playing game, giving you everything you need to create characters and lead them through the hump-backed sky towards adventure.
The game is a response to decrepit UK RPGs. A "retro" RPG rebuilt without sentimentality, corpses of darlings litter the streets.
The game is 56 pages and includes:

A fully automated character creation system to represent the vagaries of fate.

A setting baked into the rules and resistant to untangling.

Just a few thoughts on Troika while I'm rambling here.  I really like it!  However the baked in setting and background isn't really my cup of tea currently.  To a degree the backgrounds sort of remind me of Barbarians of Lemuria (another wonderful system that's easy to run).

So in my quest last night to find some interesting resources I found the following cool shit:

*This site is an amazing resource of all the advanced books (detailing the world, the mechanics etc): https://projects.inklesspen.com/fatal-and-friends/kayumi/fighting-fantasy/  (detailed in here is also explanations as to why the original advanced game was broken).  This explains a lot of the issues

*Note that's basically where I'm going to get my home brew version.

*A Fifth Edition conversion of "The warlock of firetop mountain":  https://homebrewery.naturalcrit.com/share/HyE1NYoSf

*A bunch of fan rules: http://fightingfantasygamebooks.com/index.php?option=com_content&view=article&id=1788&Itemid=37

*A pile of monsters: http://fightingfantasygamebooks.com/index.php?option=com_content&view=article&id=445&Itemid=65


What I've always loved about the system is the simplicity.  That and the idea of just being an adventurer (in the books).  You start off with a backpack, a sword and a torch and your wits.  Love it.


Posted by shanepatrickward at 6:45 AM