Well first there was the interview, then I was doing a voice over recording session that lasted two hours so I drew a map, and then on my way home from the session I started to think about writing and adventures, so hence blog 3 (in one day).  Now the smart SEO, Web nerd says to myself... "Not a smart plan bud, save this post for another day, keep your readers interested by having interesting content once a day, stop taking silly hiatus's for no reason, then spewing forth stuff as it comes"....  The other part of me, the silly writer, basically says "f**k it I'm on a roll today".

Well that was a entertaining paragraph. 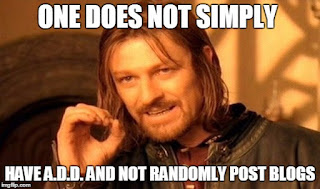 I've got to thinking that I'd like to do a bit more writing that's a little farther from the Tolkien-esq fantasy that we all hold dear.  Don't get me wrong, I love killing orcs, I love playing orcs as a GM, I love all of that stuff.  But.....

I've been very interested latetly in Ancient Greece, Romans, Samurai, Steam punk.  (not all of these are going to go together but some of them will).  For example - The Telchines https://en.wikipedia.org/wiki/Telchines (Go ahead use it, you have my permission, I am going to create something involving them, but not right this sec!).

Also while we are on the topic, read thru this https://en.wikipedia.org/wiki/List_of_magicians_in_fantasy lots of great ideas.

I am starting to think out side of the proverbial box.  I'd like to write something like that, something that's a little different. Maybe not exactly Lamentations of a flame princess or Dungeon Crawl Classics, but something that's not the typical.  And its not just because there are some great examples of this type of writing out there already (that people adore).  Tangent alert!  There are shining examples of "thinking outside of the box" within the OSR, we know of a lot of them, the ideas that I'm discussing are similar to some of them.  However maybe it'll be my own twist.  Maybe it won't amount to anything, just thinking out loud really.

But because I'm starting to feel like I need a bit of a change up.  Once again, the Orcs aren't boring.

A whole change in game perspective.  Different monsters, different races, classes, all the things that inhabit the world.  Maybe a play on a historical idea here and there.  That's what is rambling around my brain this evening.  Scratch that, that is something that has been rattling around my brain for awhile.

Posted by shanepatrickward at 9:53 PM