There comes a time when everybody needs to shake things up.

I'm sorta done with Medieval fantasy.   Don't get me wrong, I love it.  However I've been thinking about a lot of other types of campaigns, and I kinda want to throw myself and my players a twist.

are all things that are currently crossing my mind.  What would be interesting is to try and do a mash up of all of them possibly.  To run Dark Sun, or Al Quadim, I would fall into the Forgotten Realms trap, (atleast as far as the gods are concerned, and there's just too damn many of them imho).   The setting is gigantic.

However here is one thing I've been pondering:

A desert city, near a coast line.  Very Arabian nights (or Assasins Creed circa 4).  Yuanit, Githzeri, Naga's and all other hosts of baddies wander the desert and the surronding lands.  The city is ruled by a Bronze or Gold dragon.  Maybe there's a Black dragon as well, who has a host of Lizardmen in a swamp on the other side of the desert (I dunno riffing here).  But there's elements of Ancient Egypt as well, long dead mummies, pyramids (aliens? hahaa).  Not far from the coastal city is an island filled with Oriental Archetypes.  Why play a thief when you can play a Ninja, am I right? 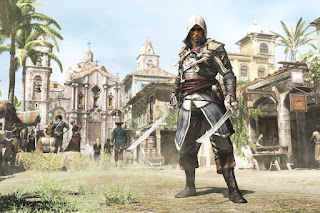 So its basically Dark Sun, Al Quadim and Oriental Adventures.

But wait, I haven't gotten to Ancient Greece yet.  Gods play a real part in the world.  The monsters of myth are very real.  Yes I'm looking at you Cyclops, Minotaur, Hyrda, Chiimera, etc.  There are 2 warring nations.  Both believe they are the rightful accoltyes to the gods.  There's a mad king, and on the other side an Emperyan (child of the gods) who runs the other side.  The PC's are caught in the middle.  The setting isn't completely historical, but there is a little less magic.  There are of course magic users, a ancient sect, where there are only ever 4 magic users.

Maybe there were dwarves & elves and tieflings long ago.  But no more.  Now Humans, Centaurs, Satyr's walk shoulder to shoulder.

You can see my dilemma.

Posted by shanepatrickward at 10:25 PM