1.  When did you get your start role playing? What was your first system that you used?

Primary school, when I was around 11 or 12. My friend's big brother played roleplaying games and introduced his brother into hobby. From that kid I got it.
My first system I used was a Finnish RPG called ANKH. It most definitely has roots in earlier D&D, but still being different. That was also the first game I ever bought, from a department store back in the days. I still own it, but from the boxed set there are only three booklets left, two without covers. 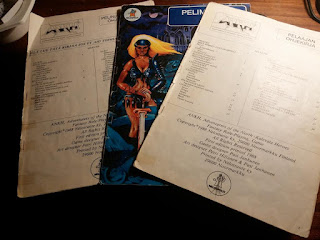 My copy (or what's left of it) of ANKH above.

2.  Tell me about Crypt Of Rabies Blog

Crypt of Rabies is my newer blog that replaced Cradle of Rabies. Cradle was a roleplaying games blog but I started it before getting really into OSR, so it was a kitchen sink. Celebrating OSR I thought that the cradle should grow. That's was the beginning of the crypt.
I write about OSR products. There's plenty of interviews, some material, article like writings and this and that.

3.  You publish old school adventures under "D-oom Products", how did the name come about out?

D-oom Products was supposed to be something else than a publishing name for roleplaying games material. I thought I'd buy a stock of out-of-business rock/goth/punk clothing store and re-sell that stuff online. It didn't happen. Then I started working on gaming material and I already had a business name set.
D-oom name... my real name is Daniel, that's D for doom. Doom is also a cool word. I have no idea how English speaking people pronounce it, though. 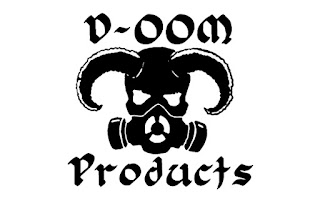 4.  What was the first thing you published?

Dragon Union, which is English translation from Finnish. Lohikäärmeliitto is a supplement for old school rules showing how you can run games in a way the original author Nestori Lehtonen thinks. I basically produced it in English also translating half of the text. But I was not alone, I had a great set of people helping me out!
I learned so much with this project, mostly what I shouldn't do and how things shouldn't be done! 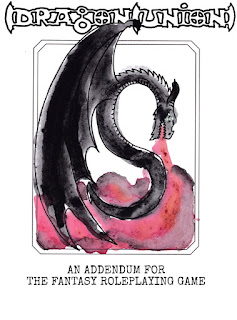 5.  So your doing a Patreon, how is that going?

I am having fun with it! Sadly some real life stress is dragging me and sucking my creative juices out, but I am there. I naturally wish there were more patrons to support me, but I am perfectly happy with those who have stepped into my cart. They are great!
It's great to see the response from people (within Google Plus, too) when people like what I am doing! Greatest reward ever when people like what I create. I can also monitor what kind of ideas are not that popular.
With Patreon there are so many awesome creators, and more start continually, it sometimes feels hard to be as damn awesome as everyone else! But hey, I enjoy doing this, so I am doing something right then.
People can download, with one month's delay, what I create from Crypt of Doom blog.

6.  What is your favorite clone?


From clones Labyrinth Lord to play Basic/Expert D&D because it's one book volume and quite faithful for the source. For D&D fantasy Swords & Wizardry because it's damn simple and elegant system, easy to learn and teach, easy to hack and modify. It is quite close to OD&D (so they say) but not a straightforward clone, so I am not sure if it qualifies. OSRIC, I probably won't play as is, but is a damn neat pocked size but thick book of material. There's so much in it!

I think that is the trinity of OSR clones. Similacrum games is another story ;) 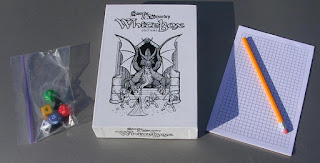 7.   What system are you currently playing?


Currently I am going to run S&W Whitebox next for a new group. We'll see what they want to play, and I'll find a system/setting/material for them. But it's going to be OSR rules in my part of the table. 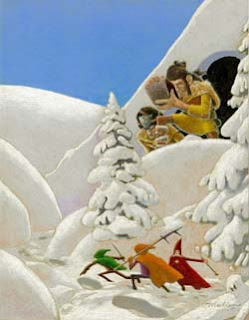 8.  You do a lot of your own artwork, have you always drawn?

Yes, I have. For my own enjoyment. The last 10 years or so I haven't drawn much. Every now and then something, but not actually focused in it. I had to start to draw to make artwork, because I couldn't afford to pay for it! I thought, what the heck, I'll do it myself! There are so many awesome OSR artists I follow at Google Plus to give inspiration. I have learned, that drawing is your own personal style and expression, not necessarily school-book-Elmore-pictures. So, I'll do some artwork as long as someone screams me to stop! Well, I think I'd continue still.

9.  What is your favorite published module other than yours?

This is easy. My favorite is Tim Short's Where Is Margesh Blackblood? because it's an awesome one nighter but also a great introduction scenario. There's some decent fights, a tougher fight, some roleplaying etc. I really like it and I've used it more than once.

From your stock I like The Lizardmen ofIllzathatch. Great dungeon, lots of content and exploring. The Overrun Mines fit my campaign really well, and it was fun to run. The second part of the dungeon was pure roleplaying! The Tomb Of Gardag The Strange, though, is your best one. I remember the thrill, "this, my man, is awesome" when I read the draft. Oh, Ugard I haven't read yet!

10.  What are the plans for the future of D-oom Products?

To publish! When I got enough Patreon material, I make a collection of it releasing it in PDF and POD. I am working on a hexcrawlmodule with Jonas Mustonen, but that's been on a small hiatus from my part. But I think it is going to be awesome! I've also got a adventure-mini-setting in the back of my head, but I'll let it cook for a while. I am also open for freelancing and I loved to work with Mythoard! So awesome. Jarrod is a great guy! I also did something for White Star zine, worked with Finnish OSR zine, some of my maps were featured in a Finnishbeginner Dungeon Master's guide... all that kind of stuff I am very open to do! 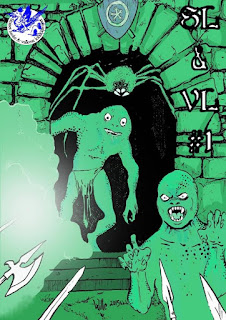 I've also have plans to publish basement print quality products from other published here, locally. I've got two deals already (with your Lizardmen and with Tim Shorts) to print them here to distribute with lower post costs than your if you sent stuff here for individual customers. I am waiting for the time to be right to put these out. At the moment OSR must grow a little bit more locally before I make you guys' products viral!

In the end, I was very satisfied with it even though I almost felt disappointed when it started. There were not many people, but I announced it too late (well, the idea was extempore) and there was another con at the same time. There's been interest for next year's Otamocon already, so I'll make it again!

Gaming was good, people was great, BBQ was tasty, sauna was hot, discussions were juicy. I am going to post a full report of the con in my blog, some day. It's delayed so much for personal reasons, but It'll be available both in English and Finnish!

12.  If you had a chance to play a character instead of DM, what kind of character would you play?

I have been a Dungeon Mastering so much, that I am a bad player. I "try" too much. But nowadays I try to play a simple character, not too complicated, not one that wants to shine. I'd explore the dungeon, adventure and the world instead of trying to be a force major and to bend the game around my character. It's hard to be a good player!

13.  IS the OSR big in Finland? What about regular D&D? 5e? What other games do you guys play that we might not know about?

OSR is most definitely growing. Me and few other guys found Google Plus community called Siniset Luolat & ValkeatLohikäärmeet (Blue Caves & White Dragons) to bring OSR gamers together. Now we've published first issue of an OSR zine! There are OSR gamers, but it's not a scene, yet. I think that OSR will be big in Finland, if we work for it.

I don't know what games others play, and how much D&D is played. There are D&D gamers (Pathfinder is still very popular), but other roleplaying games seem to be more popular. There are a good amount of Finnish games published, and some are very popular. One of the most popular games in Finland is Praedor (game by Ville Vuorela based on Petri Hiltunen's comic book series). Ville Vuorela also published a game based on a novel by Strugatski brothers.
And of course James Raggi IV lives in Finland. Lamentations of the Flame Princess is my personal national pride in roleplaying games industry!

Posted by shanepatrickward at 10:38 AM