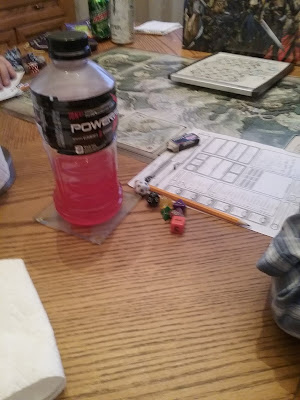 Saturday afternoon we reconvened in Barovia.  When last we left off we had just met Strahd and he was an asshole.  We managed to kill off all his wives, which I'm sure probably pissed him off.  He seems like he's totally cool with polygamy.

All of us were pretty beaten up so we decided in our infinite wisdom (of which I have 18!) that the best bet would be to lock ourselves into Strahd's tomb and have a nap!

So we sleep thru the night, get up in the morning, my character Keln decides to make some eggs, cuz they travel well in a dungeon.  All of a sudden Strahd shows up!

and blasts one mean fireball at us.

This was totally the DnD meme with monthy phyton and LOTR.  We make a break for it and run thru the damn castle back the way we came.  Strahd for whatever reason just laughs and laughs at us.  We high tail it back to the gypsy camp, have another nap, meet up with Madame Ava to discuss where in the hell the vines are?


We decide that it would be in our best interests (meta) to level our asses up a bit before going back to that damn castle.  After a brief discussion we decide to head to the village of barovia.  Which by the sounds of it is a sad place.

On the way we see the crazy skeleton guy on the horse, try and talk with him a bit.  I cast speak with animals and the horse basically screams at me, so that's fabulous.

Next encounter, a strange carriage with 2 horses and no rider.  Creepy.

We of course check it out.  I ask exactly what kind of wheels are on this carriage?

The DM says "The ones that go round and round". 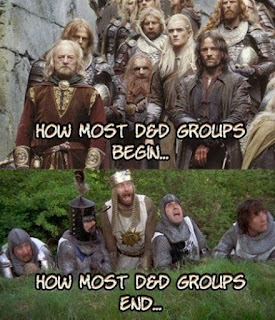 We check out the carriage, get it going, which it appears to be taking us right back to Strahd's castle.  A few heroics later and we are all tumbled off into the ditch and the carriage just keeps going. At one point the mage used mage hand to attempt to unfasten the horses from the carriage.  It worked, but they both kept going, one following the other.

I was extremely happy that no one rolled a 1 trying to get off the carriage.

Alright, so off to barovia.

The town is creepy, I peer into a window of a beaten up house and it's filled with rats.  My character is not hungry so we keep on.

We hear some sad wailing of someone crying.  Find the house which is conveniently right in the middle of town.

We scout the joint and we opt to go thru the window.

Super dirty joint, dust everywhere.  My wife's character says "I get it she's depressed, but she could atleast move a broom around this place once a week!".

The crying is coming from upstairs, we totally swat team the situation and clear all the rooms.  Stumble upon a lady bawling cuz her daughter is missing.  We decide that we will help her out.

3 of us head to the tavern for much needed refreshments and sleep.

During this whole session I've had the "Something magical of ravenkind" which requires that I attune myself to it.  And I kept forgetting to do so.  It's basically a vampire killing item.  Oh well next "long rest" maybe.

Our gnome wizard decides to pop some tags at the mercantile.  He even attempts to charm the proprietor, but no dice.  Ebeneezer won't budge on his overly pricey items.

The mage does take a mental snapshot of the map of barovia for later, which is good.

And we are all in the bar.  Gnome wants to purchase bar, but its a no go.  Besides its not the busiest tavern in Barovia.  The decision is made to look for another establishment.

We discuss a few things with a nice solider dude who has a bit of a quest for us.  Getting his daughter out of town before Strahd takes her up to his castle.  (I mean we killed his wives, he's looking for more I guess).  Which also makes me wonder about the other girl who is missing.

We decide that next session we will help out the solider, spirit away his daughter and head west.  Apparently there is a vineyard there, and since we are all part time wino's, things should work out.

I still haven't attuned myself.


Posted by shanepatrickward at 7:41 AM