Take me down to rehash city! 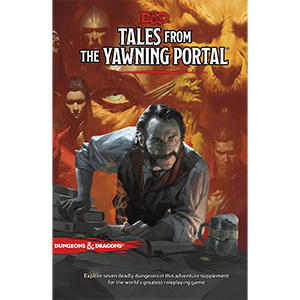 I had a very interesting conversation with a friend of mine last night about the new wotc product release "Tales from the yawning portal".  Which by the way my friend already pre-ordered, for the most part because he intends to collect all of the 5e adventures/splat books etc.

The first part of the discussion was "why are they releasing this right now?" My opinion because I think they need a first quarter release, and whatever big module they are working on is probably still in development.

But the thing that somewhat grinds my gears is the fact that there's been so many rehashes of old modules, and this one is just another in a long line of this kind of thing.  How many times has Tomb of horrors been released????

Let's check. Well as per wikipedia  looks like atleast four times, this new release will make 5! Funny thing is if you go and grab the original you can just restat the darn thing for whatever new fandangled system you are using. (BTW the pdf is $4.99, tales from the yawning portal is going to clock in at $50)

Alright, here's a brief breakdown of the releases to date from my friends perspective.

I am sure one could argue that the new modules are ideas from other modules as well.

As far as the upcoming release, here's my friends theory on it.


I'm just going over my copy of Volo's Guide to Monsters, and I'm thinking about what the upcoming module, codenamed "Labyrinth" could be.
Fact 1: The current Monster Manual depicts the Xanathar on the cover.
Fact 2: There is a large section of VGtM highlighting beholders.
Fact 3: There is a large subsection in the Beholder section of VGtM going into great detail about The Xanathar Guild.
Fact 4: Chris Perkins has told us in previous interviews (I can't cite the source but I'm sure there are people out there who can) to look to source books for clues as to what future modules will be.
From these clues, I theorize that the upcoming module, codename 'Labyrinth', to be centred around beholders in general and The Xanathar Guild in particular. This next adventure will take us far underneath Waterdeep to overthrow the tyranny of Zushaxx and The Xanathar Guild.
If I'm right, this is going to be one of the best published adventures yet, and I'm really looking forward to it.
This whole thing makes me realize how much I like all the exciting things that are happening in the OSR movement.  I get it, WOTC like any company needs to make money.  What I question is, why do people still keep buying the same adventures over and over again? I guess the world is made up of a bunch of different people right? For instance my buddy who is collecting everything.  Bearing in my he just got into D&D in the last year or so, and hasn't followed it from the beginning or at the very least earlier editions.
On another note, +Zak Sabbath  posted a interesting topic the other day.  This sort of goes to the whole wotc thing, and my mild detest for FR.
1. Favorite WOTC/TSR/Judges Guild module2. Favorite OSR/DIY D&D/modern indie module*3. Mash them up-*that you didn't write﻿
My response:

Sword of the dales and liberation of the demonslayer. From the beginning they are similar. Quest for a sword. The real twist is taking a bunch of players with far too much meta knowledge of forgotten realms canon and throwing them into the gonzo world of liberation. Specifically if the whole thing is setup as a vanilla fr campaign. Using sword of the dales as the starting point. ﻿
Now just to point out, Sword of the dales is not my favourite module, however it is the first one I received when I got my 2e books for Christmas a long time ago. But yes, it would be mildly entertaining to take my players who as above have far to much knowledge of the FR canon and throw them into the craziness of Liberation.
Obviously this is the internet, and this is just my rambling opinion, so don't take it to hard.  I'm not bashing wotc, as I said they are a business (go and make all the money).
That said, go and buy these things.
Specifically this cool assed module.
or these.
Oh and if you didn't catch the earworm, here's some Guns N' Fucking Roses.

Posted by shanepatrickward at 7:14 AM