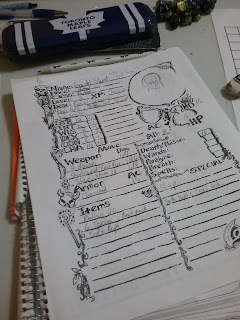 First off, Egad it was epic! It's been quite a few months since we played some old school dnd, specifically Davids campaign.  Everyone had started university and stuff just got hectic, then the holidays, this happens.

When last we left off we had murdered a bunch of priests, which apparently WE WERE NOT supposed to do!  So the group made a beeline outta town.

We had been tasked with attempting to get a prisoner from the church back to his home safely.  His name was RD and he was a farmer.  Apparently we were hitting paydirt getting this guy home.

We also have a side quest to scout another army, find their location and report back.  In the world there's a pile of different factions and armies all fighting with each other.   We haven't quite picked a side yet.  My plan is to remain neutral and play them all off each other until such time as they figure it out.  At that point back pedal out of the room!

For whatever reason no one chased us out of town.  We got very close to RD's farm, the DM laid a grid map on the table for us.  We split the party, my wife (roseanna), myself (Grendel no use for a last name) and RD went one way.  The thief (niles), the wizard (nikola, super eastern European accent guy!) and Edil (dwarf fighter) went another direction.  We noticed a small amount of smoke coming from the cabin and got midly worried.  At one point I attempted to lift Edil the dwarf on my shoulders.  To failed dex checks and we were on the ground!  The field is filled with very tall wheat so we were not able to see much.

The other party (niles, nikola and edil) were captured by a bunch of soliders camped out in the farm yard.  Well specifically nikola, who went off to negotiate.

Cue hillarious negotiation with the Captain of the army who has made his home in RD's farm house.  RD's mother was also there, and she had a terribly silly accent (very similar to howard's mom on big bang theory).

"Alright, mr captains, I'd like to get this farmhouses back for rd's and his mothers, whats is its thats you'ds like us's to dos, with yous????"

(note honest to god so funny).

The gist of the negotiation was the Giacom (capn of army) had seized the farmhouse property and all gold etc.   He was however looking for RD as he had some information for him.  Of course we didn't get our reward for returning RD, but we got a new quest.  South of the farmhouse Giacom's brother was having a crazy orgy and we were supposed to bring his ass back and have him swear allegiance to his brothers army.  (this guy is basically tyrion lannister).  In return for bringing Giacoms brother back we would get some pay, and we were allowed to load up on all kinds of gear before we left.  (This guy was a crazy negotiator, basically Hans Grubber). At one point I passed a note to Nikola that said "We shouldn't negotiate with terrorists".


The gear shopping basically became a trip to walmart with a open credit card.  The dwarf grabbed some plate mail (which has the symbol of Giacoms army, which could be problematic as hell later).  Piles of sacks (with logo), a donkey!!!! rations, etc.  I had previously had 2 terrible daggers and I grabbed myself a rather boring short sword.  Nikola desperately wanted some oil and a 10 FOOT POLE!

With all our awesome new gear in tow, bellys full and max hit points we set off for the coast.  Which is about a days ride.  We get to the beach in the evening and start discussing what we should do.

Options are as follows;
1.  Find the brother in the south
2.  Go to the town of FOB and scout different army, report back to big major city.

Both of which are a equal distance away from us.

We decide to sleep on it and take watches.

I get the last watch, the sun is barely rising and I notice to large crocodiles out of the corner of my eye, coming out of the water.


Posted by shanepatrickward at 1:30 PM