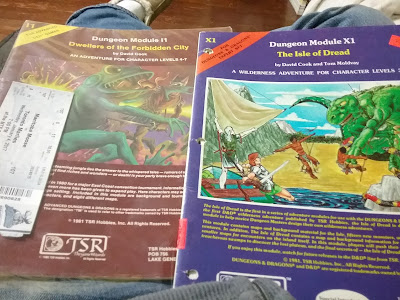 I couldn't contain myself and posted up pictures of my awesome deal that I got on the weekend.  My wife and I went and checked out "Manitoba Comic Con", which is a smaller event, than the Central Canada Comic Con that happens in October (both con's are ran by the same company).  I was on the look out for some D&D stuff, and I knew that one of the vendors was going to be there and they had previously advertised D&D stuff half off on their facebook page.  I stumbled on to their table and immediately found:

Dwellers Of The Forbidden City and Isle Of Dread, the combined total with 50% off came to $12.63 woo!

They had a pile of other cool stuff, including early 90's late 80's D&D, 3e, 4e stuff, hackmaster, star wars RPG, and they had against the giants which looked to be in good shape (for $50, so $25).  I happily walked away with Forbidden City & Isle of dread.

I've come to the conclusion that I really want to collect hard copies of all those cool modules.  Basically all the B/X stuff.  (vault of the drow, the lost city, saltmarsh, etc).  I'm slowly making a list of the modules that I would like to add to the collection.

Weird thing, I've always wanted to collect something, but I've never figured out exactly what I'd like to collect.  I mean I'm a MOTU, GI JOE, and Star Wars fanboy, but the idea of collecting figurines is just blah to me.

Thus far in the B/X collection I have the following:

The thing about collecting this stuff is that it fulfills a need, but it's also extremely practical, because I will actually use them.  When was the last time you had a big GI JOE/COBRA fight in your basement?

After briefly reading thru Dwellers of the forbidden city, I think I can probably place it somewhere within the isle of dread with a little tweaking.  Possibly on one of the other smaller islands.


Posted by shanepatrickward at 6:00 AM

Email ThisBlogThis!Share to TwitterShare to FacebookShare to Pinterest
Labels: b/x, Dwellers Of The Forbidden City, Isle Of Dread