Thoughts from Skord as he lays his head upon a pillow 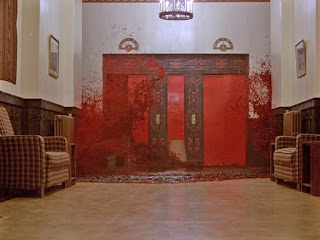 Unlike Funder, I do not have anyone to write this to.  Instead I let the memories of the day wash over me as I try to get some much needed rest.  The morning started off easy enough, we had just finished killing a bunch of ugly ghasts the night before.  We got up in the morning, and stretched out the aches and pains from the battle.  I was still in fairly bad shape, but it seems the consensus was to press on and check out this "canter's grotto".

In my fitless sleep I decided that my mace needed a name, the only thing I could come up with was "spear".  Which was mostly to confuse the locals.  And the fact that I probably need a spear.  More on that later.

After we had a bit of breakfast, we noticed that a trail near us was completely covered in spiderwebs (some even hanging from the trees above us).  After a bit of thinking and conversation, we pressed on thru the webs.  I should note that the stuff is quite sticky and I spent the next half hour trying to relive myself of it.

As we got closer to the grotto, we smelled overwhelming incense.

The grotto was located in a grassy gnoll.  Cautiously we crept up and looked around.  I suggested that we check for alternate entrances, as I had heard stories of trapped and fake doorways in the past.  Kojack went to take a look at the door, and found that it was trapped with large pots filled with greenish liquid.  None of us had the stomach to try it.

We pressed on into the grotto.  Funder thankfully scouted ahead checking on things.  The first few minutes into the dungeon he did not find any thing significant.  And then! He noticed a group of what I can only describe as Imps.  What have we got ourselves into?

The decision was made to attempt to capture one, and then we quickly escaped the dungeon.  Hoping to interrogate the little bastard, we made it outside.  However a few of the imps companions followed us.  A large fight ensued.  May I say thank god for my cohorts, especially the cleric who healed me. I should also note that he was suspiciously absent when we fought the ghasts?

Alas, I will figure that out at some point.

We murdered the imps, and I came to the conclusion that there parts maybe worth something to an alchemist or magic user.  The other thing we realized was that the Imps were the ones creating the webs, as they had webbing coming from their undersides.

We ventured back into the dungeon turning south, Kojack listened at the door and heard some argument happening, between what he believed was two people.

We decided to go ahead and bum rush the door, breaking in we caught the two in surprise.  One of which was a fairly overweight character named Huberto, which I believe I may have met before.

I jumped on a table in the room scattering papers (we found out afterwards that they were blueprints for an evil temple).  Swinging my mace named spear I attacked the guard wearing plate mail.  I missed, and swore at the great imbibber for not helping me out in my time of need.  My faith is failing me.

In the heat of the battle I remember that Huberto was from Scorn and he was a textile merchant.

The cleric was giving him quite a good smacking, and the others helped me out trying to take out hte guard.  There was some brief discussion about attempting to interrogate these two, but they sucummbed to their wounds prior to us making a decision.  That little halfling i have to give him credit, he dove under a table and held a torch up to the crotch of the guard.

All of a sudden we heard a large noise coming down the hall.  We quickly barred the door with the table.  Once again the halfling surprised me, he was able to lift a table that was probably his same weight?   The wonders of the great imbibber!

The table only held for so long, the door in splinters, the head of a demon stuck thru.  Terror.

By this point I was bleeding profusely, rathgar thankfully healed me again.  My mace did not seem to do much damage to it.  I made a mental note to silver it with my remaining monies.  Food will have to wait.

We fought the demon as best we could, at some point we managed to get out of the room and lead the demon into it.  The halfling tossed me his sling with some silver stones and I attempted to fire some at it.

The party was attempting to escape, yet the cleric and the curious dwarf kept at the demon trying to take it down.  The courage of the dwarf knows no limits.  I believe he is courageous, although I question his intellect on occasion.

The halfing cried out to his God and held up a silver tankard, charging the demon he bonked it over the head multiple times and then swiftly ran away.  The demon died in a huge rush of greenish liquid.  Unfortunately I was standing in the door way when the wave of acidic crap flowed out of the body.

My shield, plate mail melted away, and worse yet, my mace named spear melted into a puddle of goo.

We made a hasty escape, the rest of the party banged up but alive.  At least they still have armour, I am hesitant even to walk back to town in underwear.

Unfortunately the two people we fought were also drowned in the acid, all of their armour and any clues were lost.

I may try and find some kind of menial job so that I can buy some new armour.  I haven't decided yet.  I know the party managed to find some silver pieces.....

It seems that I am stuck with this lot in life, I cannot go back to scorn as I'm a wanted man, I have no money for armour or weapons, I will have to wait to find a hireling to help me.

I did forget to mention, I said a prayer for Kaylim, the dwarves torch bearer.  He died a courageous death.

Alas, it is now time to sleep.


Don't forget to check out our GMs website. https://www.gothridgemanor.com

Posted by shanepatrickward at 7:22 AM