I got together with Tim, Matt, Joe and Erik to play some nerd games last night.  7 PM my time, which works out perfectly actually.  It took me a bit to figure out what was going on, as this was my first game with these guys.  They had previously played in the campaign so they had some ideas as to what was going on.

The premise that Tim has come up with is pretty cool.  We are basically out on the borderlands, and there are a few different factions vying for control.  My character "skord" had previously worked with Erik's character "rathgar".  I won't get too much into his background, as the guys may read this.

Speaking of backgrounds, Tim sent me a 6 page background/what's up with the setting pdf.  Which is awesome! I was blown away honestly. 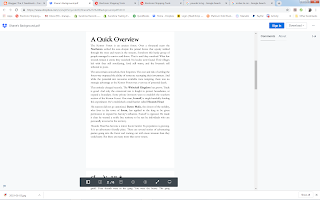 So basically the party was sorta split.  Rathgar was in the tavern in the small town of Hounds Head (like seriously small town, the blacksmith can't even make arrows!)

The other 2 characters had just finished finding the body of a knight in the outskirts.

They eventually made their way back to town.  Where i was introduced. 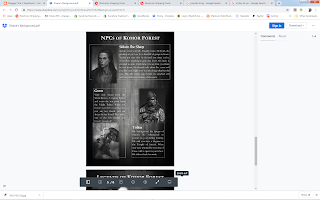 We decided to talk with the sorta know it all sage of the town who gave us some good ideas.

We stayed in the tavern over night, and woke up to disguises left in our room.

Apparently the cleric Rathgar was met in the night by someone, who gave him a quest.  He gave us the very briefest of explanations and we were off. 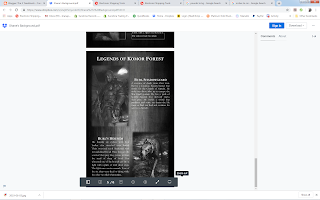 Prior to leaving the halfling had a signet ring that he found on the body of a dead knight, he decided to stash it away in the eaves of the tavern roof.   We then headed out of town and caught up with a merchant caravan (one wagon) and two guards.  Some of the party took their time scoping out the situation.

What proceeded was one of the best roleplaying moments I've been involved in.  Cue some monty python playing women antics (complete with high pitched voices).

Basically the funniest distraction ever.  The merchant was so confused with these older women talking to him about all kinds of random things.  The halfling jumped up and basically robbed the caravan of moonstones.  Then got the horse and cart rolling away from the action.   Skord the warrior acted as the meat and restrained one of the guards.

Seriously so funny.  I can't even remember all of what was said, but my throat was sore from laughing so hard.   We left off with the moonstones in tow having escaped the situation without blodshed (which was what we needed to do).  The next plan was to go and check out a grotto covered in spiderwebs.  I cannot fucking wait for Monday (whose every said that before!).  Thanks guys! that was fucking fantastic.

Tim went and did a podcast about monday evening, and it's awesome (good recap!)
https://anchor.fm/gothridgemanor/episodes/Best-Heist-EVAR--With-a-gaggle-of-call-ins-e489kb


I gotta say I learned something from Tim's DMing style (and from listening to Froth's cast).  Sometimes it's the best thing in the world to sit back and just let the players go.  I often worry too much about planning things out.  Just sit back and let it happen! 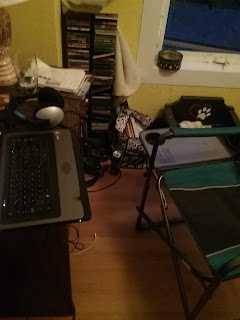 As some of you may know, I'm currently working on a Man cave in the basement.  It's a bit of a work in progress at this point, but I should hopefully be down there before the next session.  The last few times I've played on line, I've used my tablet (which works well) however the mic on it is on the back so I basically have to hold it in my lap.  As well (see picture) I've been in this small room with a bunch of crap, sitting in front of a small sewing desk.

As you can see it's not ideal.

I currently have a few ideas for a computer solution.  Just deciding on what the best plan is for me.

I ended up using roll20 on my laptop to see what was going on and for rolling dice, and hangouts for talking.

I got a line on a few computers.  Just figuring stuff out.

Posted by shanepatrickward at 7:28 AM