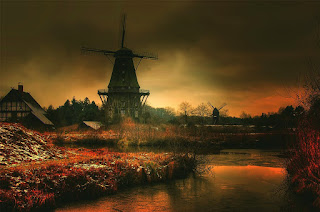 Thankfully Funder has also written a journal entry, of which you can read here:

Letter to Elder Mildred, dated the 6th day of the month of the Lion
http://www.msjx.org/2019/06/letter-to-elder-mildred-dated-6th-day.html

Oh man, another funny one!  So we were without our cleric last night, but that didn't stop us from doing some adventuring.  We had left off having basically robbed a wagon of moonstones.  The discussion opened up that maybe we should consider building ourselves a small home in the town of hounds head.

I gotta say its super handy to have my character sheet in google drive.  I was making notes the whole session and tracking things.  When I run my next home game, I think I'll fire up the computer to take care of the DMing side of things.

Here's my notes from last night:


As you can see it was a fairly epic session. After we noticed Sir Santor coming back into town all bandaged up (to our surprise! we thought he was dead). We decided to follow him into the inn. He sat down and had a brief discussion with Ivanoff (who didn't seem very pleased). We followed up talking to Ivanoff with our possible plans of building a Mill (and a brewery!). He sort of beat around the bush about pricing within the town. Apparently he had given the party some land but it was a bit further away. The idea is we could have a place to hang our hat, and get a brewmesiter to make us some decent ale. The balance of which we could then sell to the local tavern (win win honestly!). We told Ivanoff that we had posted a message on the town board (Hounds Head Craigslist!). We was so happy! Unfortunately we can barely put 2 sentences together between the three of us, so the actual message was missing contact info hahaha.

After that Kojack attempted to talk up a lovely dwarf lady but failed miserably (I believe he needs to grow his beard longer).

He was itching for a fight, so we headed off into the wilderness (at night.... good plan boys).

We ran into some weird forest ghasts! Got into a helluva a melee. My character managed to wack one, and then got hit and paralyzed. Then kojack almost went down, his henchman managed to throw some burning oil at it. Matt's halfling named Funder prayed to his God "the great imbiber" and tossed a healing potion down my throat. Because I was partially burned and paralzed the healing potion not only healed me but it ingrained a small tattoo in my skin of a tankard (friggin cool).

Just FYI I am now a convert! I got up and at em after the fight was over.

Oh and we levelled up! Wooo! I somehow managed to re-roll some decent hit points (17 fuck yeah) 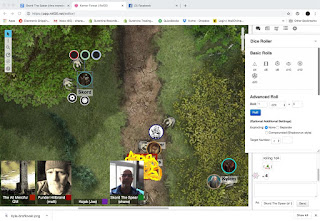 ROLL20:
So this is my second time playing with Tim and the guys in roll 20. The last session we didn't have any actual battles, but last night we did. And I gotta say i was flabbergasted by how friggin cool it was! The one and only other time that I used roll 20 it was all text based. This makes me want to run Tomb Of Gardag, and re-create all the rooms in pyromancers.

Posted by shanepatrickward at 7:33 AM