I decided to spend a bit of time this morning over coffee looking at some cool new stuff OSR stuff.

Dice Roll Zine #2: It's currently available in print only here:  https://hogtowngames.bigcartel.com/product/dice-roll-zine-2  I'd hazard to guess it will be available on pdf thru drivethru shortly.  Here is the summary:

Dice Roll Zine is a 40-page, saddle-stitched, digest-sized print zine for old-school RPGs written by Steven A. Cook and illustrated by some of the best retro-inspired artists.

This is an 1e AD&D adventure made in 1988. It was one of the first dungeons I ever made when I was a teenager. So, it’s about as Old Skoool as it gets … not in an OSR sense, but in a “I’ve made a dungeon who wants to play” kind of way. If you’re looking for understandable/sensible dungeon ecology, themes, plot, and balanced encounters etc., then you’ve signed up for the wrong adventure!

The Ghost Fleet - A Edge of Space Supplement
I'm going to go ahead and download Edge Of Space, looks like a fun game.  I was thinking it might be a good one to pull out after a regular session of DND, or when I only have so many players show up.  Ghost Fleet is an adventure for the system.

In the wreckage of the MMS Yu-Ti on a desolate, un-named ice world. The CMSC has discovered the existence of a Madeiran Ghost Fleet deep in the Levigos Nebula near the center of the Rim and behind the lines of Bug space.   Believing that the fleet lay as salvage the CMSC dispatches the Sword of Hathor to survey the Ghost Fleet in hopes that the vessels could help replenish the losses sustained in the war against the Bugs … the problem is this is a Ghost Fleet in more than just name …


Edge of Space is a simple 2d6 beer and pretzels roleplaying by Chubby Monster Games and was created by the (in)famous master of cartography Matt Jackson.  Edge of Space has a simple background to get the players and GM started:  You are Space Marines for allied human systems and must defend against the onslought of alien hordes that wish to drive you and your race to total extinction.  The game is available for $1.00 on rpgnow.com and has some support by Genius Loci Games and other publishers. 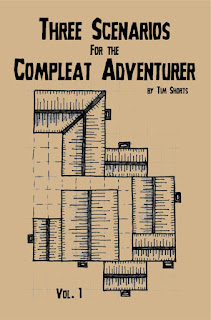 Gothridge Manor is at it again!: Tim just released this cool looking adventure:
https://www.patreon.com/gothridge
I present to you Three Adventures for the Compleat Adventure. The title is a play off the old Compleat series. I decided to return to my old ways, doing short adventures. Presenting situations to the party to explore, figure out, and possibly defeat. I’ve written three situations for three environments. Design wise the GM has the map on the left page and all the content for the map on the right page. No flipping!

First is the urban environment, Searching Ashen Alley. The party has something stolen. They see the thief head for an alley way and now need to deal with the dangerous of the city. This one is a randomly determined encounter that can introduce the party to the thieves guild. For good or bad.
The second is a traditional dungeon crawl, Tomb of the Berserker King. Nothing says adventure than plundering the tomb of some forgotten king. A nasty little crawl that might cost the characters more than they get in return.
The third and final installment is a roleplaying situation, The Hanging Tree. I believe these type encounters can develop depth for the characters. It gives the characters a chance to help without ever drawing their weapons. The situation deals with a suicidal boy. The topic could trigger some people so please consider that. 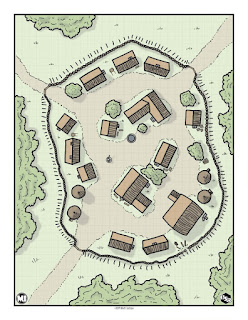 Matt Jackson has a bunch of great maps over on Patreon:  https://www.patreon.com/msjackson/posts
Really diggin this town map that Matt drew.
Dhul Crag:  Nine days ride to the south, but still two day's ride from The Wall sits the small village of Dhul Crag. An Outpost in the middle of a dangerous wilderness, this walled cluster of buildings serves as a welcome respite from the horrors of the surrounding Deep Wold, a well-known forest of grim portent. The sturdy oak wall has, so far, been penetrated only once (repairs are are ongoing).

Other cool things that have caught my eye, but haven't had a chance to check them out yet (that's a helluva a title!)
*The Ubix #2:  In the realms of dream and the hitnerland wilds, The Ubix signals your path to adventure! This is an OSR zine of 4 RPG elements underscored by simple black and white artwork. Within these 14 pages you'll find bloodstained surgeons, hateful vampiric aliens, levitating thrones, and a spell that you may never awake from!
Mice with Legitimate Grievances:  A small dungeon for 1st or 0th level characters. The Mice Folk have had enough. First a man thing came into their home to start playing with dead things (yuck!), and now the man things have damaged their roof with careless farming. So help them: the next man thing they see is going to get bopped on the head with a stick!
The Screaming Swamp:  This is an expansion of my contribution to the Tenkar’s Landing G+ Community collaborative sandbox setting, Eilean Dubh (The Black Isle).  Each contribution to The Black Isle is a single 6 mile hex. There is a lot here in this lone hex. One can easily change to a 12 mile hex, making each sub-hex a mile. Even larger hexes may be used, if you need a massive swamp.  I have added more tables specific to this area and swamps in general. The text has has much more revision, correction, and additions than the version released in The Black Isle.
MOI:  The mewe hex descriptions are basically done, I've got a few more to add to it (and by the sounds of it Scott had a few extra that he was working on).  Managed to cultivate a really interesting d100 table of "shit you find on the ground".  After all that is done, I think I'll crowd source a few small dungeons, possibly using paratime design's maps.  Then it'll get released into the wild.  I do have one epic conundrum, the maps are all licensed under creative commons, which is cool.  I just dunno if I can use the OGL for the mechanics within the product?  I'll mull that over in my head.  As is typical with any of my collabs, this is just for fun, and will be a download available only on this blog.  Should be complete in a week or two.
Have a Happy Sunday!