The Cult Of The Black Fist 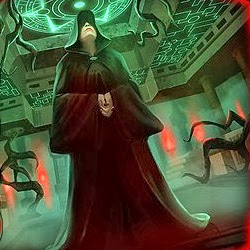 After this last weekends game session I've had a few more thoughts on role playing the Keep on the borderlands.  +Johua De Santo  had suggested that the Priests that inhabit the keep are bringing all manner of evil minions to help with the resurrecting of a evil god (in his version of the game).  Taking that premise, I created the "Cult Of The Black Fist", All of the Evil Priest's in the "Keep on the borderlands" are members.  Most of the goblins, etc are seen wearing smocks, that cover there armor with a fist squeezing a world, (ala LOTR).  The Cults main mission is to gather together enough Monsters to help them to take over the keep and run the commoners out of the borderlands for good.  This way the Cult can continue with there weird experiments, etc.

In the next adventure I've decided the following things as a beginning premise,

1.  The Captain of the guard at the keep has been mysteriously assassinated, leaving the troops leaderless

2.   Hordes of monsters wearing the black fist's logo are starting to convene near the keep, balista's and war machines are moving.

3.  The lord, wants the PC's to consult with the Elves, to see if they will come to the Keep's aid.

4.  The Cult is also consulting with the Elves.

5.  The PC's need to escape the keep thru an underground network of tunnels, and then make it thru a forest adventure to find the Elves village.  There the Elven king will send them on a quest for an ancient relic to prove the "worthiness of men".  When the PC's get there they will meet up with a member of the Cult, who is also trying to gain favor of the elves.

6.  a dungeon or some kinda crawl to find the Ancient relic.  There are cultist's within the dungeon, some dead, some actively trying to stop the PC's from finding the relic.  Other's searching for it themselves.  At one point I would like to have one of the Cult have to work with the PCs.   (much like Storm Shadow in GI JOE 2 Retaliation movie).

This is what I have so far.

Posted by shanepatrickward at 10:45 AM