Vault of the Faceless Giants! 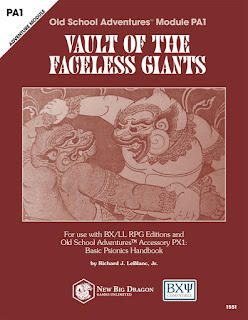 Why do these Giants have no faces?????  I have no idea! Which is why I'm going to grab the beta of this right now.

I really like the idea of putting a module up for free like this, firstly as a playtest, and to gain a bit of interested on the overall.

INTRODUCTION
The tiny jungle village of Phoumi Sramol has fallen victim, they believe, to the evil hand of the demon lord Rahb.
Many generations ago, a temple set in the side of a cliff a few miles northwest of the village acted as the center of worship for evil adherents of Rahb. Livestock would die, villagers would be kidnapped, plagues would befall the area. It was believed this was all done in service of bringing Rahb into the physical world (the Material Plane) from his Abyssal home (an island fortress known as Lanku).
Suddenly, however, all of the evil and suspicious activity around the temple stopped.
Legend holds that it was the great adventurer Somnang whose hand stopped the evil, but no one is really sure.

Now, generations later, an occurrence in the village has the locals questioning whether or not the evil is returning.

A local woman named Kanya claims her baby was snatched from her hands in the middle of the night by followers of Rahb, dressed in loin cloths, their faces painted to resemble the many-faced demon.
Many of the villagers deny the temple’s relationship to the missing child. Maybe they are naive; maybe they are just fearful of the truth. Regardless, they suggest instead the woman “lost” the baby in the jungle and a tiger ate it; they purport she is simply unwilling to admit her absentmindedness (something for which she is well known by the locals).
If the woman is telling the truth, however, then there is much to be feared, and the story bears investigating—not just for the sake of the woman and the community, but for the sake of a world where this kind of evil can exist.

You can grab a copy at rpgnow.com
Posted by shanepatrickward at 7:07 AM