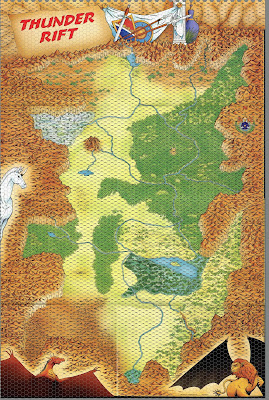 Awhile back I noticed a post on G+ regarding Thunderrift for the Mystara setting.  It peaked my interested.  First off the original map looks super bad assed.

From wikipedia:
Thunder Rift is a setting created in the 1990s for the "basic" D&D product line. The setting, an alternative to the Known World/Mystara (the standard D&D setting), was conceived as a starting point for beginning game groups and to be gradually expanded by the DM. The Thunder Rift worked as a self-contained setting, but could be inserted in any existing game world as well.

Looking at the map I realize how genius this actually is.  A totally self contained world, in which you can pretty much decide everything that goes on in it.  I have been trying to think of a way of incorporating various old school modules (new ones & old favorites) into a fantasy world, that will feel very "put together".  Obviously I could just grab a copy of the greyhawk campaign to fit in the old school modules.  Alternatively I could just start creating my own hex world and fit all of these modules that I want to run into it.  However here's a map!  Melnir could easily be the village of Homlett.  The Keep Of The Black Knight, could easily be the Keep On The Borderlands, actually it would be absolutely perfect starting point as its as south as it gets!

The campaign is slowly starting to take place:

- I'd like to use the Norse Gods for the pantheon.
- I'd like to use as much old school modules as possible.
- As far as races go, the usual suspects as well I'd like to include all the extra races from 5e (like the dragonborn.
-  I want the feel to be very Swords & Sorcery, not a lot of civilization, just small pockets.  Crazy barbarian raiders, wild eyed magic users, slavers
-  A bit of it will have a oriental adventures feel as well.  I haven't quite decided on this, but the Monk, Assassin & Paladin classes could easily be switcheroo'd to Shaolin Monk, Ninja & Samurai respectively.
-  Because the world is limited this will allow the hero's to go from hero's of the village, to saviour's of the world.  (The whole 5e leveling up thing).

And a wonderful post about starting a campaign within the Thunder Rift using 5e - http://www.pandius.com/tr5ecamp.html

What I'd like to find is a copy of the map used in the above post.
Just looking at it I've starting getting ideas here and there.  Pretty much anytime I look at a map I started slowly writing things in my head. 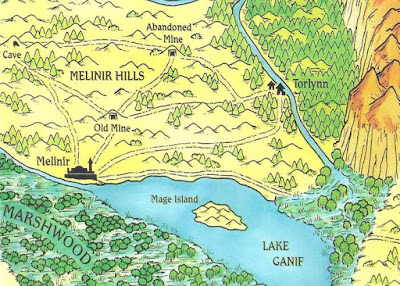 Anyways, the whole point of this blog post is to basically say, there's lots of wonderful resources out there that you can use and modify for your own purposes.  Which is pretty much what DIY is all about isn't it?

I really want some Rakasha within the module, I'm missing them!

Also check out http://5egrognard.blogspot.ca/
for some good ideas on playing 5e old school.