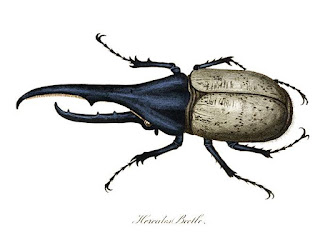 Players note: I can't believe that we just finished session 9. Time flies when you are rolling virtual dice. Speaking of, the dice gods were on my side last night! Most of my rolls were decent. Tim made us roll d6s for random monster encounters. Generally speaking when I run a game, I do that behind the screen, but I like the idea of having the PCs do it. Image courtesy of https://www.oldbookillustrations.com/

In the previous session, we met this dark dwarf in Hound's Head named Durban who explained to us how to get to the north-men's dungeon. He took us to the vicinity of the area we needed to explore and then said "Go east and follow the creek". My friend Kojack and I decided to get up early and explore. The other adventurer's in the party were sleeping like babies, and we didn't want to wake them up. Achtung (the hireling wizard of mine) came along on the trek. We figured we would do a bit of scouting, and get an idea of what the land looked like prior to waking up the other adventurers.

Within a few minutes of leaving the camp we stumbled upon a very large (I'm going to say giant) deer carcass that we being munched on by a weird beetle. It looked up at us, and snapped it's pinchers, which then created a electrical shock between them. A fight ensued, 3 on 1 this was going to be easy.

After a few good wacks, we got a rhythm and managed to kill the beetle. Kojack thought about the idea of using the carapace of the beetle as a shield. Unfortunately Skord had wacked it so hard that there wasn't really much left over. It did turn out that the beetle was filled with Viz (a magical component that sometimes allows +1 to things, or allows a caster to cast more often, very nifty).

As we explored we kept finding burial mounds, most of which were very old and undisturbed. I have to admit, the hair stood up on the back of my neck while we investigated them.

As we moved along, we found an old stone obelisk. The dwarf recognized that it had been made by his kinsmen. There was no writing, runes or any identifying marks. Grabbing a shovel Kojack dug down and found the bottom of the stone, there was still nothing of real interest.

We moved west, and ran into another shocker beetle. This place is infested with them!

Thankfully, death came swiftly to the beetle and we kept moving. We finally found the creek, and looked around. There was some interesting 3 foot plants on the far side of the creek. Achtung went to investigate.

Alas, after a quick spray of what can only be described as poison needles, Achtung met his maker. I have half a mind not to hire another poor soul, it's better if I do this alone. (or among my adventuring friends).

From the other side of the creek we hurled arrows and stones at the vampiric plant, and were able to disable it without much damage to ourselves.

Unfortunately we had to take a few things off of Achtung's corpse, but we did bury him. Hopefully he finds what he's looking for in another life.

As we meandered along the creek bed, we stumbled upon a recently deceased corpse. It appeared to be human, a cleric (from a quick search of his body, we found a holy symbol of the Great Imbibber). Beside him was a battle staff, which we took with us. I gave him his last rights, invoking the name of the Great Imbibber and his gospel. The cleric should have made his way to the halls of the great tavern in the sky.

We kept moving south along the creek, and finding more burial mounds (still fucking creepy). We finally stumbled upon the end of the creek, which lead to a large hill. Near the bottom of the hill was a cave entrance. Which was swarming with more of those god forsaken beetles. We fought one, while the others seemed to busy themselves at the bottom of the hill. Not being completely inept, we made a break for it before we got swarmed by them. Retracing our steps we found a small clearing near the edge of the forest and made camp. We will have to circle back and find the rest of the crew.

Hopefully they have some decent stew on, I'm getting hangry!


Posted by shanepatrickward at 7:13 AM