The Halflings Gem - Conclusion To The Icewind Dale Trilogy 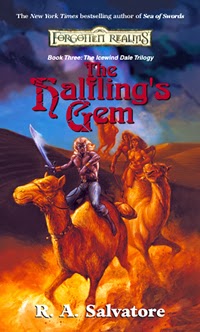 I'm deep into the last book in the Icewind Dale Trilogy "The Halflings Gem".  I love how much the characters in the book are you "typical" personality's, atleast as far as D&D goes.  Bruenor, the ever stubborn, scottish speaking grumbly dwarf, Regis the halfling "rumblebelly" brings to mind the Mary &   Pip from LOTR, more concerned with their belly's than adventure.  Of course the might Wulfgar, is so much Conan, its crazy!   However despite the fact that the books have a lot of these personality's they don't dissuade my from reading them at all!  I admit I'm a Drizzt fanboy, freely.  And since reading the first 3 dark elf books I've been hooked.

All that being said, reading books that take place in the realms, has got me re-reading a lot of my old D&D books.  I have the menzoberranzan campaign setting, the FR one and the Dale's sourcebook (which is apparently highly coveted).  I also just picked up a cheap copy of Myth Drannor, that i'm currently pouring over.

As to wether I will run the realms again I'm not sure as of yet.  I do miss Elminster.  As I posted the other day I sent home one of my players with my old 2nd edition books, in hopes that he may get into DMing as well (that makes me smile), but I also sent him home with the first 2 books in the trilogy.  Of course there is a possibility that we may end up in the realms after he finishes them.  I guess the thing about the Realms is that is very much the typical type of campaign world that we all quite like (or secretly like).  For instance just latetly I started working on a big Hex map that's 11x17.  looking back at it, its slowly becoming my own version of the realms.  Not to say that I should stop myself from creating my own campaign world.  I do love that idea, because no one can say "hey that's not right!".  Much like playing in a band when you write your own material, nobody can say your playing it wrong.

We have agreed as a group that we are going to need a re-set as far as RPGing is concerned.  As to wether we play D&D, Basic Fantasy, or AFF, is to be decided eventually.  The one good thing that we have agreed to is a semi weekly game.  Which begs the question "Shane do you have time to pull this off?".

That was a ramble!


Posted by shanepatrickward at 8:02 AM