This is a work in progress.  The intention is to create a zine, however I figured I'd put this out there for the time being while I work on a few more ideas.  This may end up just being this blog post and that's it.  Time will tell. 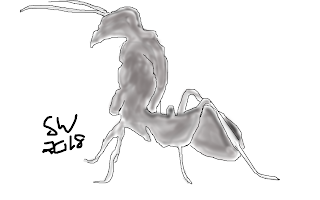 Ant’s are very interesting insects aren’t they? Really strong, colony minded with indomitable spirits.  In our fantasy games, they generally make an appearance as “GIANT ANTS!”  (ACHK! RUN!!!!), these are fun I suppose?  Really though, all they are is giant version of the creatures we step on from time to time.  Anything giant is scary.   The thing is there’s a lot more we can do with Ants, and for that matter Giant Ants.  So without further ado, why don’t we take a little trip and learn some new things about Ants shall we?

The general populace is made up of Antoomuns (everyday worker ants).  They are very strong and skilled warriors.  They get a +1 when attacking with missile weapons (their favourite being spears).  Antoomuns have infravision, allowing them to see up to 60’ in the dark.  Only female Antoomuns can become Queens.

A world beyond the Colony
While the antoomun society is home for most, there are some who desire more out of life.  Those brave souls who leave the colony in search of adventure, treasure and great stories to tell.  Beneath the colonies and into the depths of the earth there are wondourus adventures to be had.  Most adventuring companies are made up of a group of friends, that have decided to see the world.  Often they will return to the colony, to regroup, heal and happily spend their hard earned coin.  Upon returning to the colony, it is known that a tribute must be paid to the Queen, ussually in the form of a magical item or a tithe of gold.  The society doesn’t look down upon these brave souls, but instead lauds them for their great courage.  Parties are usually made up of six individuals, some with magical powers, others with a God looking over their shoulder, the rest with a firm grip on a weapon.

Without a trace
(first level magic-user spell)
Range:  see below
Duration :  see below
This spell will follow all previous trails and passages of the wizard, cleaning up any footprints, trails, scents, leaving no trace.  The spell will clean one mile of trail per caster level.


Bear hug
(second level magic-user spell)
Range:  touch
Duration:  1 round per caster level
When cast this spell will imbue the caster with great strength allowing them to do 4d6 damage on a successful attack.  The spell increases the strength of the caster to 20.


Whizpop
(third level magic-user spell)
Range:  30’
Duration:  1d4 + caster level
When this spell is cast it will disorientate 1d4 creatures who fail a saving throw vs spells. The effect is a dizzying amount of stars, lights and sounds centered around the targets head.  See duration and range above.

Artifacts
Enabler:  There is only one of these per colony.  The Enabler enhances the queens ability to send out commands to her population.  When worn by non-ants, it will allow the wearer to “charm person” at will four times a day.  When worn by any Ant other than a female, it will degrade their senses, leaving them as a pile of unresponsive meat.


Wicked Wand Of Wanderlust:  When this wand is held, the carrier feels an extreme need to go out on a quest.  The wand is intelligent and will hint at places to explore.  The wand can cast a beam of electrical energy once per day, doing 2d4 damage on a successful attack roll.


Time Trident:  This gold inlaid trident allows the caster to back track thru time to the previous day.  This effect can only be used twice.  When used as a weapon, it does 1d8 damage and adds +2 to hit.


The Undying Scroll:   The scroll appears as a regular piece of parchment, however when unfurled it shows a random spell.  The scroll can only be used once per day.  Roll 1d6 to determine the type of spell:  1.  Magic Missile  2.  Cure Light Wounds  3.  Bless  4.  Invisibility  5.  Fireball  6.  Charm Person


Society
The antoomun society is a Matriarchy with the Queen holding the absolute position of power.  Generally all females are held in a higher esteem than males, they have better jobs, their pick of lovers & partners.  Unlike certain dark elf society's males are not looked down upon, but are subservient to the females needs and whims.

From birth to the age of ten ants spend their life in a egg, living in a world that they believe is real.

Religion
Antoomun’s follow a variety of Gods and Goddess’s, most notably “Giz” and “Galof”, twins born from the union of the first ants.  Giz and Galof fulfil the spectrum of alignment, Giz being wholly evil and Galof being the epitome of goodness.  Within the society, clerics & priests can be either male or female.  Each colony will have a religious leader, dubbed “The Grand Laith” who overseers day to day activities of the church and leads all religious holidays.

A female Antoomun may become Queen by doing one of the following things:  1.  Create a resistance within the colony and overthrow the Queen in a vote.   2.  Create her own Colony, bringing part of the population with her.  3.  Challenge the current Queen to a fight to the death.  Only a Antoomun of level 9 or higher can become a Queen.
Posted by shanepatrickward at 8:33 AM