Response to "OSR Guide For The Perplexed Questionnaire (Send it around)"


Zak came up with a cool idea.
http://dndwithpornstars.blogspot.com/2018/10/osr-guide-for-perplexed-questionnaire.html?zx=16010449dcc61df3

1. One article or blog entry that exemplifies the best of the Old School Renaissance for me:
https://lithyscaphe.blogspot.com/p/principia-apocrypha.html
2. My favorite piece of OSR wisdom/advice/snark:
Art on every page - Zak S.  Runner up "rulings not rules" - Some guy who wrote D&D books.
3. Best OSR module/supplement:

4. My favorite house rule (by someone else):
I believe James West came up with this idea, or at the very least he uses it.  Basically it's like inspiration, but instead you get a Luck stat which allows you to reroll any dice (for the amount of times you have luck until it runs out).  I've allowed PCs to roll 1d6 at the start of the game, and that is the amount of luck that they have.
5. How I found out about the OSR:
I've written about this before.  I have no idea how I actually found out about google plus, but I logged in one day.  Typed in D&D because I was feeling nostalgic, and the OSR community came up.  I was like "What the heck is this?".  It's a god damned rabbit hole is what it is! and it's wonderful.
6. My favorite OSR online resource/toy:
http://www.hyperborea.tv/uploads/4/4/6/6/44662451/asshrandom-adv-gen.pdf

7. Best place to talk to other OSR gamers:
It seems to be mewe nowadays, but I really really like Anchor.
8. Other places I might be found hanging out talking games:
http://reddit.com/r/osr
9. My awesome, pithy OSR take nobody appreciates enough:
I really like playing low wisdom characters, it's so much fun. Or characters that dont' have superior stats.  Balance is silly.
10. My favorite non-OSR RPG:
Well since I basically only play OSR games, I'm going to go out on a limb and say either Munchkin or Herosquest.  Both of which are considered board games.  I personally feel like Fighting Fantasy is considered OSR, but if you disagree then that's my answer to this question.

11. Why I like OSR stuff:
The idea that someone is sitting at home writing or drawing something that is in their mind and then it's released out into the public makes me very happy.  The constant flow of cool useable things.
12. Two other cool OSR things you should know about that I haven’t named yet:
https://anchor.fm/spikepit/
http://gothridgemanor.blogspot.com/
13. If I could read but one other RPG blog but my own it would be:
https://swordsandstitchery.blogspot.com/
14. A game thing I made that I like quite a lot is:
d100 things found in pockets.
https://www.drivethrurpg.com/product/187802/d100-things-found-in-pockets?src=hottest_filtered
15. I'm currently running/playing:
I'm currently a player in a home brew basic fantasy campaign, player in blueholme "return of the blue baron" game, player in 5e TOA.  I'm plotting N1 Against the cult of the reptile god using S&W whenever I get a decent laptop.
16. I don't care whether you use ascending or descending AC because:
math is math, and as long as people stick to the same unarmored number in their releases it makes no matter.  Descending 9, and Ascending 10.
17. The OSRest picture I could post on short notice: 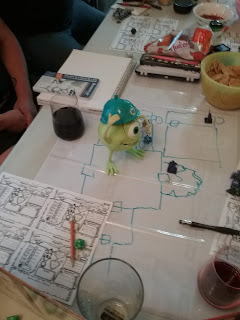 Posted by shanepatrickward at 10:50 AM

Email ThisBlogThis!Share to TwitterShare to FacebookShare to Pinterest
Labels: OSR Guide For The Perplexed Questionnaire