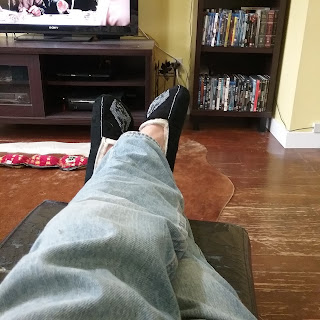 I started playing Skyrim again this weekend.  This time around I'm playing basically "meat", a Orc wielding a hand axe, shield and heavy armour.  I decided not to do all the typical quests, but just go out adventuring.

Rather than go directly to Whiterun, and get the house there, I thought about how I really dug the house in Markarth, since it's built on dwemmer ruins it's kinda nifty.

Once I got to the town, I remembered about the Silver Blood family, and how they pretty much run things in Markarth.  This gave me a few ideas for gaming.  Specifically when you have a faction that owns a lot of real estate and has some power, their influence will grow.  Regardless of the fact that there is an appointed Jarl within the city.  This is proven when you walk into Understone keep and are stopped by a member of the family wanted to speak with the Jarl.  As well pretty much anywhere you go in that town there is discussion of the Silver Bloods.

If you were running something like Keep on the borderlands, and wanted a mine nearby you could use my adventure "The Overrun Mines".  Maybe have a family who owns the mine, and is pouring money into shops in the keep.  The casetellan may have decided to get some of the monsters from the caves of chaos to infiltrate the mine, in a sense closing it down.  This adds to the intrigue of both modules.  Of course having an influx of silver in town will up prices for things.  Poor adventurers!

I should note, I'm still kinda blotto, and I may not be blogging and participating a community discussions for awhile.  This was just something in my head this morning that I wanted to get out there.