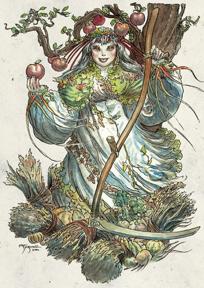 I've never really given much thought to my Favorite Deity, but I always quite liked Chauntea from the Forgotten Realms.

Chauntea (pronounced Chawn-TEE-ah),[1] the Grain Goddess orthe Great Mother[1] was the goddess of life[3] and a parallel deity to Silvanus, who was considered the god of wild nature, whilst Chauntea herself was seen as being the embodiment of all things agrarian or agriculture. She was a goddess of agriculture, plants cultivated by humans, farmers, gardeners, and summer.
Some of her worshipers claimed that her divine glimmer gave life to the natural world, and some contended that she was the creator and source of all mortal races. In some sense Chauntea was the manifestation of the earth itself—the Avatar of the twin worlds Abeir-Toril. Her most despised enemy was Talona, the lady of pestilence, since she had a disposition to wreak suffering, disease and decay upon the natural world.
Learn more http://forgottenrealms.wikia.com/wiki/Chauntea

As for Fighting Fantasy game books, I think that Logaan The Trickster God, Of Neuatrality is a interesting concept, one that is in historical fiction as well, especially native american lore.  http://fightingfantasy.wikia.com/wiki/Logaan
Logaan is the Lord of the Trickster Gods. He is a Neutral god and is devoted to maintaining a balance between Good andEvil and between Order and Chaos.  Logaan himself is often depicted as a crazed clown. He is a Neutral god and is accompanied by the mysterious twins Kataand Petros who represent the pull between Order and Chaos, Good and Evil.  He is the creator of Mankind. In creating mankind he was the first god to think of putting a part of himself into what he created from the magical clay of life.