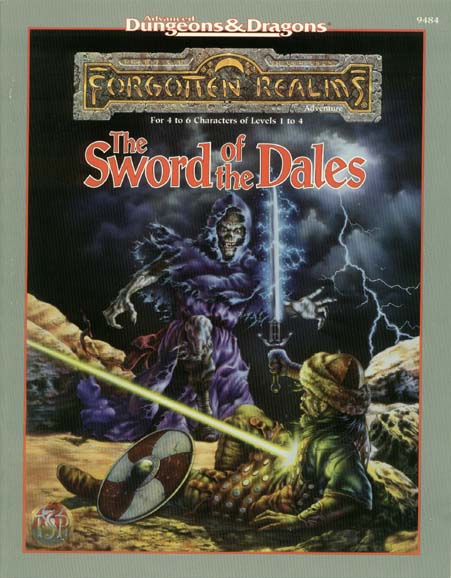 The best adventure I ever ran was "The sword of the dales", it was for AD&D 2ed.  I had gotten a hold of this adventure (and the Dales campaign setting) before I got the Forgotten Realms Boxed Set.  Funny thing was I spent most of my time in the dales with our adventurer's anyways, it just has a mystique about it, and obviously Greenwood spent a lot of time there with his pals before he wrote it.  One of the Stand Out Characters of the adventure was Randal Morn, the rightful ruler of Daggerdale.  Here is the information on the backcover.

The Sword of the Dales, an icon of theDalelands symbolizing the unity and strength of the people, has reappeared! Created byShraevyn the weapons-mage hundreds of years ago, the lost Sword had become nothing more than a fantastic children's tale—until now.

A group of warriors led by Randal Morn, rightfule ruler of Daggerdale, rushed to theSword's resting place to recover it, but dark forces awaited them, and Randal and his men fell to an ambush. Only one man escaped, yet he brought hope with him that Randal Morn yet lives. Resolved to rescue his leader, that lone survivor turned to Elminster of Shadowdale for aid.
But Elminster is gone, off plane-hoping while the fate of Daggerdale hangs in the balance. Hence, it is up to Lhaeo, scribe to the old mage, to find a group of heroes who have mettle enough to face down the menace which claimed Randal Morn and his hearty followers...
This is the first of three modules that grant the player characters the opportunity to determine the fate of Daggerdale. The Saga continues with The Secret of Spiderhaunt and concludes with The Return of Randal Morn.
http://forgottenrealms.wikia.com/wiki/The_Sword_of_the_Dales

In my searching about this module I did manage to find an extremely horrible pdf version online illegally, a quick search will find it for you, I'd prefer not to put the link up.  This was a really fun adventure, it has some overland travel with a few planned encounters, it is to a degree a railroad adventure, as you have to get to a tomb eventually, however if you can extend the module a bit, and take off in a different direction with one of the encounters or plan your own.  I can't comment on the rest of the trilogy, as I only ever owned the first one, but If you'd like to learn more, there is a synopsis below.
http://forgotten-realms.wandering-dwarf.com/daggerdale/sotd_synopsis.php
There is also a really nice cross hatch map of the tomb in the module.
Posted by shanepatrickward at 6:25 AM